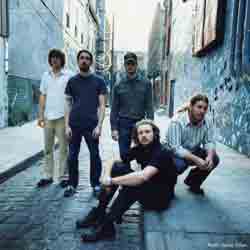 Hirsute country post-rockers My Morning Jacket are coming onstage a full 20 minutes earlier than scheduled, their rather surprised-looking PR informs us as we shuffle up to the imposingly baroque Somerset House. It becomes quickly apparent that this isn’t a sop to help the wind and rain-chilled audience get home earlier – the band seem to be adding time to their schedule both to squeeze in some extra tracks (public spirited) and to extend every single one by a couple of minutes each (less so).

Two and a bit hours later, the audience departs – deafened, confused, elated, stunned, but not a single one demanding their money back. If you were to look up the dictionary definition of ‘your money’s worth’, there’d probably be a picture of MMJ frontman Jim James twirling a cape over his head while the band wig out in a psychedelic trance in the background.

Whether, as a gig-goer, you’d enjoy watching My Morning Jacket will probably rest on your stance on the practical application of musicianship. Is a guitar solo the best moment of any track? Does a decent bass riff make up for a mediocre five minute dirge? Does the sudden appearance of a saxophone at an inopportune moment leave you wide eyed with expectation? If the answer to any of these is yes, beg, borrow or steal a ticket to see MMJ wherever and whenever they play. You’ll be in hog heaven. If the answer is no, perhaps tread cautiously – because while the band have a knack of turning out astonishing, psychedelia-tinged pop songs, there’s a lot of prog before they get to the rock.

The band themselves have skirted around the mainstream for a while – now on their sixth album, they operate in the same kind of skyscraper-sized experimental country genre as The Besnard Lakes and Band Of Horses, twisting the kind of cookie-cutter chugging rock of Kings Of Leon with touches of Frank Zappa, post punk and shoegaze. Perhaps deserving of slightly more mainstream recognition than they have, they’ve nonetheless garnered a passionate following among musos, and a clutch of recognizably idiosyncratic singles.

Live, the band are tighter than the lid of a jar of pickles found in your grandmother’s attic – each song is turned into a mini opus, with guitar solos, vocal histrionics and a ferociously propulsive rhythm section combining to create a sensory overload that just keeps on getting louder and louder until you feel like your ears are going to explode. With a set comprised of most of new record Circuital and earlier album Z, there’s a whole bunch of proggy, part-instrumental tracks that, while obviously impressive, begin to slide into an all-encompassing fog after a while. The tone is perhaps set by six minute instrumental opener Victory Dance, which ricochets thrillingly around the sumptuous venue’s walls, but doesn’t stop some of the audience making an early sprint for the bar.

One thing it’s difficult to fault is the group’s onstage enthusiasm. From the strange, heavy metal-eunuch-voiced frontman twirling a cape over his head to the constantly-headbanging guitarist (and not forgetting a drummer that looked to be made of 90% hair) the group are consummate, gregarious performers playing without guile or irony. It’s one thing to have a band that look like they’re enjoying themselves as much as the audience. It’s perhaps another to see one that seem to be enjoying themselves more.

There are many jaw dropping, head-nodding moments that more than make up for the apparent self indulgence. Off the Record is still a gloriously concise, innocent pop record. The electronic skank of Wordless Chorus is murky and atmospheric, while Gideon is the kind of soaring, sky-opening epic that U2 would happily turn out at Glastonbury. Yet, as nine-minute set closer Dodante shows, as the guitarist smashes the “break glass in case of lack of saxophone” box and begins playing a single note over and over again, they may continue to be a fringe pursuit for a while yet.

My Morning Jacket MP3s or CDs

My Morning Jacket on Spotify