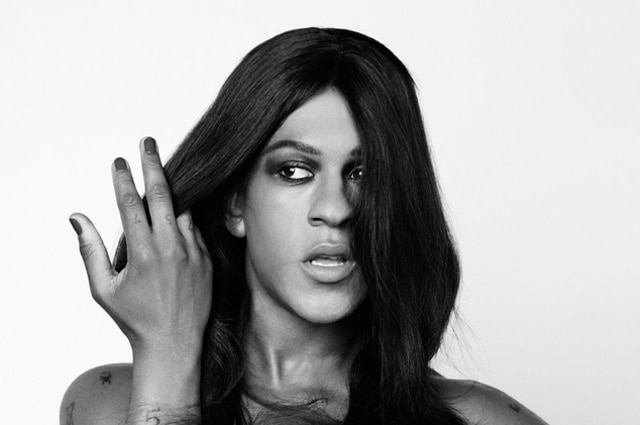 Mykki Blanco’s career to date has been a fascinating journey to follow, oscillating between the three poles of music industry, art world and academia in an ongoing search for a home. Articulating some clear anxieties about patronage along the way, this year’s revelation of his HIV positive status seems to have galvanized something, though: a new-found confidence within the music industry has emerged, evidenced by the deal to start his own imprint label Dogfood, launched through the established !K7 group, and its just-released compliation album/mixtape/collective, C-ore.

A stated aim of C-ore is to disrupt conventional ideas of African-American music and, while there is an implied queerness here, it pushes right at the edge of what we might understand black queerness and performativity to be. The label’s roster (Violence, Yves Tumor, Psychoegyptian) also form the basis of the C-ore album and a short film shot over the summer, as well as the current series of shows. In attendance tonight are Tumor and the diminuitive Violence, whose shaved-back afro frames his face like that of a lion. His voice becomes more blood curdling as the night goes on, transitioning from rhymes to a death growl. The statuesque Tumor is the more free-wheeling of the pair, using his voice to improvise streams of dubby, indecipherable sound as he hangs from the rafters, towering over the crowd.

The excitable discussions of a blossoming queer hip-hop movement that permeated 2012 already seem very distant; Blanco now clearly feels no need to capitalize still on the shock value of his debut as a pop star, Wavvy, and its much circulated video, unsurprisingly not played tonight. He’s moved on, and the music overall tonight is impossible to pigeonhole, hovering somewhere between hip-hop, grimy beats and hardcore. Before the performers arrive on stage, the audience are primed with disorientating swirls of noise that suggest that anything but a typical hip-hop show is about to hit. When it does hit, it’s definitely challenging to its audience in many ways, but never feels alienating, thanks to the way the performer-audience dynamic is managed. Rather than simply shocking the audience into submission, the show draws the crowd in through the blurring of boundaries that happens on multiple levels.

Crucial to achieving this is the use of the stage, which is turned into a sideshow, minimalizing its importance. Whoever is in main control of the mic penetrates the audience by any means possible: hanging intimidatingly from rafters and frequent bouts of crowdsurfing. While Blanco is the star glue holding the whole concept together, there isn’t any particular hierarchy given to the performers, who take turns in the spotlight, albeit one that refuses to rest in one place. At one point Blanco switches one on in the middle of the audience, carving out a circle which he fills with expertly spat out rhymes. And this is the key to why tonight is so powerful: performers repeatedly create a vortex, into which the crowd is sucked again and again. The experience is of a white squall of carnivalesque chaos made more visceral by the water hurled into the maelstrom from the stage. It feels truly transformative but, crucially, never self-conscious. In a final act of blurring, Blanco dives off the stage again to dance with the audience, extending the performance as we move seamlessly into a DJ set.

‘Question yourself and everything you know’ seems to be the credo of this tour, summed up in a moment where Blanco removes his wig and holds it out front of him as if to say ‘who and what are you’? This is a highly intelligent, creative and hugely talented performer who we desperately need right now. Where this can all go from here will be interesting to watch, as the live experience won’t easily translate into anything consumable beyond the show itself. Catch him if you can live, but don’t expect to pin him down.