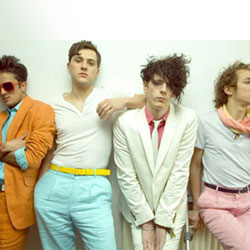 Kicking off 2010’s Somerset House series of gigs staged within the grounds of the opulent sometime tax office, Mystery Jets bring a certain shabbiness to proceedings. It’s not that they aren’t well turned out – one of them has a suit jacket on – it’s just that their slightly ramshackle brand of streamlined indie-pop has always been slightly too off-kilter to really connect. Despite knowing their way around a good tune, they’ve yet to really have a breakthrough hit and three albums in (their latest, Serotonin, was released three days prior), they’ve probably settled for mid-table status.

But, as we all know by now, a lack of mainstream success does not a bad band make. As the four-piece bounce onto the stage just as the sun finally drops behind the gorgeous buildings that make the walls of the courtyard, it’s clear they’re unpeturbed by their lack of chart action. Opener and recent single Flash A Hungry Smile bounds around like an excited puppy, all “do, do, do” backing vocals and ascending synth lines. It’s a singalong in waiting and the inclusion of a whistling solo only enforces that sense of immediacy.

Most of the set is taken up with tracks from the new album, along with the singles from Twenty One, their criminally underrated second. Young Love (bereft of Laura Marling, unfortunately), Hideaway, Half In Love With Elizabeth and a delirious Two Doors Down all spark the crowd into life, with the mix of stylish moves and impassioned singalongs making this 17th Century, neo-classical building look like an indie disco. The pace is then slackened by the lovely Flakes and the swooning Melt.

Unfortunately, for all the band’s efforts, the sound lets them down badly. Muddy and poorly mixed, it’s frankly all over the place, with vocals lost to rattling bass and guitar parts battling with Blaine Harrison’s keyboards. It’s not helped by the band’s inability to really work a larger crowd, with the majority of the songs played to the front rows.

But with songs as good as Lady Grey, Dreaming Of Another World and Show Me The Light, the evening is saved by tunes that are undeniable. So, they may not be setting the charts alight and they seem destined to be filed in the ‘criminally underrated’ pile, but Mystery Jets keep the hardcore faithful happy.