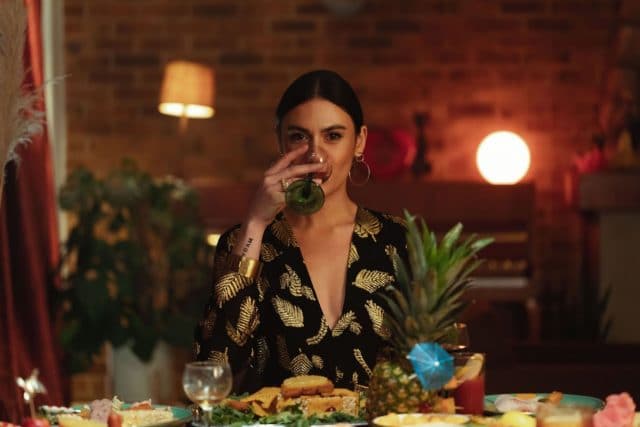 The difference between Nadine Shah the singer and Nadine Shah the between-tracks raconteur is stark. Equally entertaining, but starkly contrasted. For when Shah sings (and this amplified by what she chooses to sing tonight) it is intense. Unflinching. Red in tooth and claw. Gimlet eyed. When she’s not singing, when she’s just shooting the breeze, chatting away, questioning why someone in the front row would wear a Weezer t-shirt to one of her gigs, she’s warm, funny and self deprecating.

It’s a dichotomy. But the parts are complementary and, as a superset, it makes Shah an extremely compelling proposition. And here in the Moth Club, the London venue most likely to be redeveloped into a pair of gold lame trousers, this is an early chance for Shah to dangle some tracks from her forthcoming album, Kitchen Sink. There’s five danglers. Well four, if you’re actually counting unique songs, as we get Ladies For Babies (Goats For Love) twice – once as part of the normal set, and then again as a set closer. It suffers not for being presented twice in close order, being as it is, quite a thing.

It begins with skeletal beats, faintly eastern echoes and handclaps straight out of cult indoctrinations, with Shah languidly draping her vocal over the top before guitars get choppier, saxophones get parpier (courtesy of Pete Wareham, who by this point has already done a stint as part of excellent support Melt Yourself Down) and Shah’s voice gains urgency.

Elsewhere, the opening Kitchen Sink, with choppy guitars chk-chk-chking away and yet more hand clap chicanery and the, unintroduced, pair of other new material showcase something that sounds restrained, surefooted and subtle. And made jazzier by the ever-present but never-outstaying saxophone.

Perhaps it’s a little more circumspect than some of her earlier material, the jangling, clanging guitars that swagger along behind Fast Food, or the jerky strut of Evil, but hardy to the extent that it doesn’t all feel coherently part of the whole.

It’s also always smart enough to leave Shah as the centre of attention. Which, whether she’s comparing Melt Yourself Down to the pretty friend her mother warned her to not hang around with as she wouldn’t get any, brassily belting her way through a smoky Relief, or attempting to stare holes through the back wall of the venue during a coruscating Out The Way, is completely the right place for her.