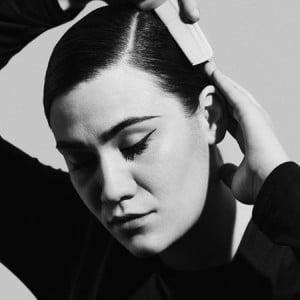 Like a lot of funny people, she seems to either lack, or possibly just chooses to ignore, the filter between thought and mouth. So often after saying something a look of surprises crosses her face, as if she’s hearing it at the same time as we are.

The humour is in stark contrast to the songs, which are dark, seething with torment, blood red with emotion and wholly intoxicating. Tonight is, mostly, a showcase for her latest album, the impressive Fast Food, so when Shah announces they’re going to play some tracks from her first album, the positive response is dismissed with a grin and a “don’t pretend you bought it. We were incredibly niche”.

Niche, perhaps. But the ones from the debut (Love Your Dum And Mad) are fantastic. The piano-led Remember is all windswept drama, the hulking Aching Bones broods ominously, menacing over the audience, the throbbing bassline managing to sound just like Angel by Massive Attack.

Throughout, you can’t tear your eyes away from Shah. She is such a presence. The accompaniment is sometimes folky, sometimes angular and discordant and sometimes quietly reflective, but throughout she remains the perfectly poised centre of it all. Her pristine voice cutting through with a crystalline purity.

On Matador, it whispers through a quiet, eerie beginnings alongside the kind of metronomic tick that would drive Edgar Allan Poe to distraction to something which rages with forceful volume. On Stealing Cars it provides the emotional weight to something which sounds bigger and more metropolitan, while during the encore, accompanied only by a guitar, it imparts Divided with the sort of tender longing that makes you want to cancel your plans, turn off the phone and gaze at pictures of day-old ducklings with that certain special someone.

Full of intrigue, full of great songs. On this evidence Shah isn’t going to be niche for very much longer.