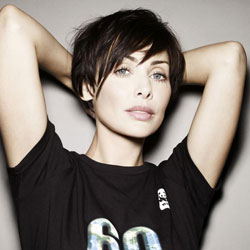 Natalie Imbruglia will, to some, forever be known as Beth from Neighbours. But since her 1997 debut Left Of The Middle she’s been releasing albums every four years.

And so here she is, four years since the release of Counting Down The Days, getting ready for the next chapter in her music career.

Or course it’s not easy to bridge a gap of that length, and so for her fourth album, Come To Life, popstar/actress/skincare enthusiast Imbruglia has armed herself with various industry faithfuls including Chris Martin, Brian Eno and ex-husband Daniel Johns as additional weaponry.

Ahead of its release, she’s been showcasing that new material at a series of small venues which, in her words, has been brilliant as it gives her a chance to see everybody’s faces. Jumping on stage midway through a Blondie song, and dressed down in a rock chick outfit of black dress, black leggings and gold chain, she looked nothing other than stunning. She launched straight into a couple of new tracks that married her typical MOR style with touches of electro, and a voice that sounded stronger than ever.

In an intelligently structured set-list, she didn’t overplay the unfamiliar and mixed in a healthy number of old favourites, including Shiver, Wishing I Was There and, of course, Torn. But while it was nice to hear her retread her old ground, it was more interesting to be able to hear and assess the new stuff.

The Chris Martin-penned tracks were a mixed bag. Lucas, apparently a left-over Coldplay song, was a little disappointing, and while the band performed well on a complex song with differing meters, it didn’t really captivate the crowd. Next track Fun was more impressive, with an epic rock feel reminiscent of Embrace. But Want, the lead single from Come To Life that was introduced as a “sexy one” in fact sounded weak. She has stronger singles to offer.

What shone throughout the gig was the strength of Imbruglia’s voice which, in a world of interchangeable pop stars, was instantly recognisable. The trouble was that so few risks were taken. Occasional electro beats were thrown in, but there were no songs that could actually be described as ‘electro’. It didn’t feel like she was really pushing her boundaries or testing her listeners. And while she’s a great singer with a competent set of musicians, songwriters and producers around her, she really needs something better than competent to stand apart.

Having said that, there’s no doubting that her music is still a passion. It’s not an easy industry to succeed in, and she could have turned her focus elsewhere a long time ago. So while her music could do with a bit more character, it sounded strong enough to keep her fans happy for now, and hopefully until 2013.