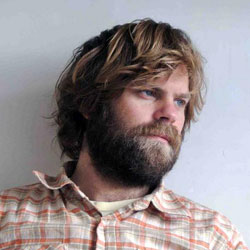 Firmly established as one of London’s trendiest venues, the Institute of Contemporary Arts was tonight playing host to a label which, to its credit, wouldn’t trip off the tongue in the same sentence as “trendy”.

4AD do, however, have one admirably eclectic roster of artists. Scott Walker has just signed to their ranks, joining Kristin Hersh, The Throwing Muses, Tanya Donnely and some artists who’ve been away for far too long – Neil Halstead of Mojave 3, and Magnetophone. These last two were the main attractions tonight at this label showcase.

Early in the evening, Cass McCombs and his band took to the stage in new wave style. Cass, sporting a preppy-schoolboy-becomes-Human-League look with a school jumper and hair straight from the early ’80s, was loud, raucous even. The bass threatened to become a tube train, the drums rattled the walls and Cass yowled over it all as if his life depended on it. Such a sound balance was not best placed to show off Cass’s talents, but there was enough of interest to suggest a listen to the CD would be time well spent.

King Creosote appeared with an accordion and an incongruous Scots accent, announced he’d be playing three songs and went all wistful. A folksy love ballad had the audience shuffling, until suddenly he set aside his accordion, got up and wiggled his ass. “I’m put in mind of Olivia Newton-John,” he explained. The audience ceased shuffling and started smiling. His lyrics became ever more bawdy – and his audience were listening to them. A mix of comedy and music then, but comedy won out.

He was back for the next set as vocalist for instrumental duo Magnetophone. Their act was initially similar to their last visits to London – two guys stand behind electronics and make bleeping and farting noises. But with Creosote on vox and the sudden and startling appearance of guitar, it was clear that the duo had evolved, and had realised that people watch gigs as well as listen. It remains to be seen if Creosote makes it to their CD.

A palpable hush followed their exit as the stage was cleared for headliner Neil Halstead and his guitar. Neil had no new record to promote and instead indulged his assembled fans with what amounted to a greatest hits session – although Halstead has of course never troubled the top 40. My Life In Art from Mojave 3’s seminal Excuses For Travellers album opened the set, and an enchanted hush enveloped us all.

What followed was taken from his solo album Sleeping On Roads and the Mojave 3 albums. The least experimental and most tuneful of his works were highlighted – Between The Bars and Sleeping On Roads amongst them. As we’ve come to expect from Neil, there was no selection of guitars sporting different tunings available at his beck and call.

He retuned his guitar on stage, added the campfire touch of a harmonica and gave all the impression of being at peace with the world. There was no encore, but finishing with one of Excuses For Travellers’ standout tracks, In Love With A View, ensured his fans went away calmed, happy and looking forward to a new record.