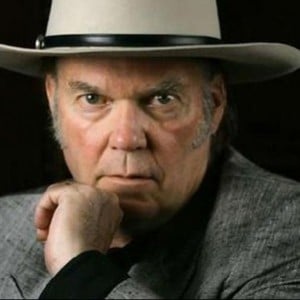 The last decade has been an especially productive period for Neil Young, even by his high standards. Studio albums have dropped down every couple of years (twice in 12 months in the case of last year’s double release of Psychedelic Pill and Americana). His insatiable, restless creativity has also seen him write his autobiography, finalise Volume 1 of his long awaited archives project as well as taking initial steps to developing the Pono, his superior quality music format and playing device. The albums may have seen slight fluctuations in quality, but what has remained unyieldingly constant is Young’s ability as a live performer. Tonight’s blisteringly powerful show with Crazy Horse emphatically reinforces this view.

The stage is set up with oversized props – huge amplifiers sit either side of Ralph Molina’s drums and a microphone towers over the band at the front of the stage. It’s almost as if things have been deliberately kept simple, to re-emphasise Young’s preference for the focus to remain solely on the music. Love And Only Love gets the evening off to a solid start, revealing Young’s voice to still be strong and resolute, if a little battle-damaged. They reach further into Young’s back catalogue with a version of Powderfinger, demonstrating tonight will have its fair share of crowd-pleasing moments.

Arguably however, it is three of the tracks from Psychedelic Pill that contribute somewhat unexpectedly to the success of the show. The title track works better live than on record, sounding charred and blackened. Ramada Inn fares similarly later in the set, incendiary and highly charged. But tonight it is Walk Like A Giant that truly stands out. The surging choruses are retained, but it is the brutal guitar deconstruction that takes place at the end which is remarkable. Young, Frank ‘Poncho’ Sampedro and Billy Talbot turn to face the amps and unleash a maelstrom that would normally be found at experimental venues in east London rather than in shiny mega-arenas. It’s a stupendously bold move and is indicative of the ‘no half-measures, no compromises’ approach adopted tonight.

The middle of the set sees Young alone on stage for a small acoustic run which comprises Comes A Time, a cover of Bob Dylan‘s Blowin’ In The Wind and Red Sun from 2000’s underappreciated Silver & Gold. It proves that few people can coax emotion out of a harmonica quite as effectively as Young.

There are some moments that work less well however. The appearance of a female performer to walk the stage whilst Young plays piano during new track Singer Without A Song seems a little forced and unnecessary, while the call and response section midway through Fuckin’ Up feels similarly superfluous and overly long, even if it can’t detract from how utterly snarling, rampaging and energising the rest of the song feels.

The bludgeoning, flattening guitar riff of Cinnamon Girl marks one of the highlights of the night, as is the brilliantly dirty, distorted line that opens My My, Hey Hey (Out Of The Blue), matched also by Young’s fiercely impassioned vocals. Standing metres from the stage, it feels exhilarating, like being hit full in the face by the accumulative weight and poignancy the song has gathered over the last 35 years. Later, they return to play a populist encore that features Like A Hurricane and Everybody Knows This Is Nowhere.

He waits until the end of the show before properly addressing the crowd. His warmth and caring words sound genuine (particularly when he addresses those members in the crowd with “young children at home sleeping who’ll wake up without a care in the world”). It shows that amongst the discordant, ragged guitars a sentimental, tender and human heart continues to beat as strongly as ever.