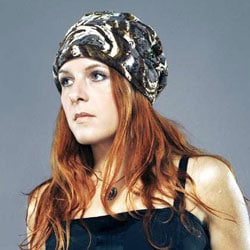 Neko Case reaches the end of a tour of the UK supporting this year’s long player, Middle Cyclone, an album that has seen her country noir gain mass appeal.

Her support act tonight, Black Gold, are gawky fey Americans with a line in emotive indie. Touted as “breathlessly experimental” in printed guff left on the Barbican’s seats, Black Gold come across as, pleasantly, anything but. Instead they sound like a superior Starsailor or an inferior Crowded House.

The theatre fills out in the interval, and the moment the lights dim, the audience erupts in anticipation. Standing centre stage with a matted nest of red hair a dress that looks crumpled and torn, wide-eyed and pale-faced, Case might have been dumped in London from the funnel of a twister. She and her backing band of large bearded men launch into the dark, fevered, skittish Things That Scare Me. Another old favourite, Maybe Sparrow sees Case’s muscular country twang intertwined with fluting and beautiful backing vocals from Kelly Hogan.

With Case unusually laconic, regular touring partner Hogan leads the audience interaction for the evening, filling in spaces while the rest of the band switch instruments with tour anecdotes.

Case and her band take a while to get into the swing of things as they rattle through People Got a Lotta Nerve and Fever from Middle Cyclone. Old favourite Hold On Hold On (covered on Marianne Faithfull‘s Easy Come Easy Go), seems to enliven the band in preparation for a storming I’m An Animal – slower and more driven than on record, it’s muscular grace sits in contrast to the beautifully fragile title track of this year’s release that follows.

They rattle through songs from the past three albums, including a jaw dropping Deep Red Bells, in which Paul Rigby’s pedal steel vies with Case’s voice for the limelight. The false ending gets a round of applause from which Case and the steel come back together, eerily blending in a sublime moment of midnight country gothic.

Following such a high, Case leaves behind more vibrant numbers for a clutch of songs of nostalgic longing. I Wish I Was The Moon, Pharoahs, Teenage Feeling and Nilsson’s Don’t Forget Me show off the talents of everyone on stage, but their languid pace takes the wind out of the evening’s sails. And while a superior version of Red Tide and live favourite The Tigers Have Spoken lift the mood, one can’t help feeling that the evening would benefit from a little of the unfettered honky-tonk country of a couple of tracks from Furnace Room Lullaby or The Virginian. Instead the setlist is culled from the three most recent albums.

The closing giddy rendition of This Tornado Loves You comes too save the bedtime mood in the theatre, and in the encore Star Witness and Sparks‘ Never Turn Your Back On Mother Earth lull the audience back to thoughts of bed, only for the finale of Train To Kansas City to rudely awaken them in a brash, brazen, joyously ramshackle chorus.

Case has the ability to be one of the most compelling live performers. But despite the strength of her recent releases and an impeccable backing band, tonight did not quite deliver. For anyone else this would have been a celebratory night of country torch song excellence but, to her credit, we expect more from Case. Still, it was a privilege to spend an evening in the company of such wonderful songs, faultless musicianship, and that glorious voice.