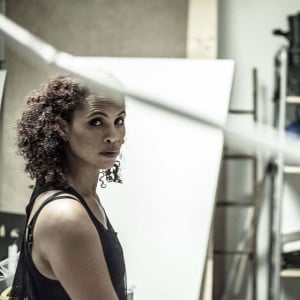 A silhoutted figure slowly crosses the stage, visible only due to the presence of her hair. This is enough to recognise Neneh Cherry, an artist who has adopted a variety of musical guises whilst barely seeming to age a day since her first solo chart hit.

Cherry is at James Lavelle’s Meltdown festival with Rocketnumbernine, the sibling duo who ably support her on the astonishing Blank Project album. This is the second of two recent albums on which Cherry has traversed more radical terrain. Her collaboration with The Thing ventured into improvised noise territory, whilst Blank Project explores minimalism, groove and bass frequencies to thrilling effect. This tantalisingly brief show is an oasis of forward thinking spirit in an otherwise curiously nostalgic festival preoccupied with legacy.

The Blank Project material sounds just as frazzled and intense live and this small ensemble now appears to be a confident unit – a little more malleable than one might expect as Cherry occasionally extemporises. The kinetic, propulsive drumming of Tom Page largely defines the sound, with the minimal synth and bass lines of Ben Page adding tiny details and colours. The sound is motorik and insistent, but with a little of the freedom and expression of Sun Ra, after whose composition the band are named.

Whilst Cherry’s voice has never been the strongest or most imposing instrument, it appears to be becoming increasingly mature and versatile. The opening Across The Water provides a useful bridging point between the soft rapping of her early hits and her current starker, more introspective approach. The full range of Cherry’s voice is on show here, from the conversational to the anxiety-laden chorus, with only the merest of percussion accompaniments. It is a powerful reminder of her distinctive talents.

The rest of the Blank Project music, whilst cohesive in its minimalist approach, also manages to find considerable variety. There is the menacing, energetic wildness of the title track and the more slippery, troubled feel of Weightless. Out Of The Black, with its widescreen melody, is the closest we get to a clear pop song. Many of the songs seem to tell of depression and recovery – and Cherry has a physical presence on stage that enhances the edgy feeling of the music.

Whilst Cherry is compelling to watch, it’s a shame that this process is made so difficult by the lighting arrangement. Clearly intended to add both atmosphere and intensity, the moments of almost complete on-stage darkness are punctuated by short sharp shocks of blinding white lights positioned on the stage floor. If this is intended to make the audience feel uncomfortable, it surely must have worked. It also makes it very difficult to observe any interaction between the three musicians.

Whilst it would be churlish to expect this to turn into a greatest hits show, the weird, slightly dissonant reversion of Buffalo Stance that finishes the show (drawing some of the crowd towards the stage for a mass dance) feels slightly out of place on its own. Given that these three musicians have now been working together for a while, perhaps some other material could have been reworked in similarly irreverent fashion. Perhaps the disarming honesty and searing intensity of Blank Project leaves us too overwhelmed for more.