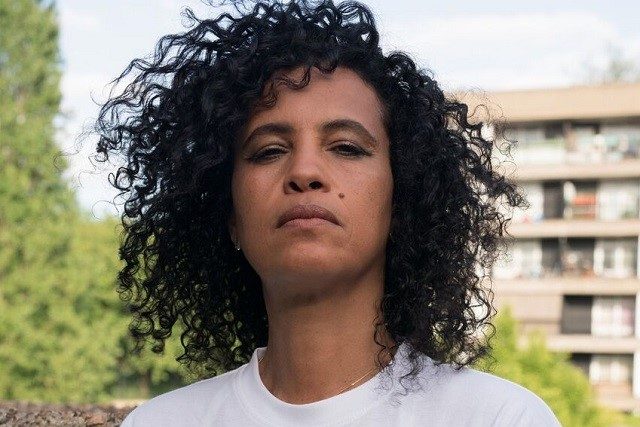 “It’s bloody Valentine’s Day!” proclaims Neneh Cherry, as she takes to the stage at Camden’s Roundhouse. This oxymoron is a perfect indication of what’s about to unfold. There may be a lot of love in the air, but Cherry is about to take us on a cathartic journey which will leave everyone spellbound, emotional and optimistic.

Kicking off with interlude Cheap Breakfast Special and then the harp-driven and bleak beauty of Fallen Leaves from her most recent album Broken Politics, this set is heavy with tracks from this album, but this is in no way a bad thing. Produced by Four Tet‘s Kieran Hebden, this is such a poignant, personal and beautiful album dealing with the refugee crisis, the fake media and gun crime. Shot Gun Shack could be lifted straight off Blue Lines, Deep Vein Thrombosis suits the venue’s enclosure and is wonderfully mesmeric, and Kong is devastating live. Bite my head off, still my world, will always be a strong message to those of us losing our voices in these dark times. There has always been a sanguine and rich defiance to Cherry’s voice and her unpretentious stage presence is truly a wonder to behold. You feel her because she feels every one of her songs in quite uninhibited form.

There is a beautiful and emotional reading from London poet James Massiah during Synchronised Devotion that captivates the audience. Then Cherry treats us to a rousing rendition of Blank Project. As we see the Mangrove Steelband take to the stage, however, none of us are prepared for a frenetic, stomping and truly magnificent version of Natural Skin Deep, shaking us to our cores with its air horns and steel drums. The roof has been well and truly blown off. She may call herself a grandma, but Cherry has lost none of her trademark sass or killer dance moves. And Cherry’s endearing ad libs throughout the evening added to her natural stage presence. Her mic sounds nice, she quips – though it’s a shame that the acoustics in the Roundhouse were not so nice.

Towards the end of the set, we are surprised with a rough and edgy version of Manchild, a song that will never have any dust on it. As Soldier ends the set, Cherry is already saying she wants to come back and, in her encore, lands us with a slower version of So Here I Come from her first and ever-vanguard album Raw Like Sushi. The set then explodes into a burst of red colour and Cherry tells us that Cameron McVey will be on vocal duties in place of Youssou N’Dour for the beautiful 7 Seconds. McVey is certainly not Youssou, but his darker and more terse delivery of the translated lyrics make the devastating song somehow more powerful. The world has not changed since this song was released. In fact, some people’s conceited entitlement to bigoted free speech has overtaken forming opinions from fact and has given an unwelcome platform to dangerous racist views. This is why honest and impassioned artists like Neneh Cherry are still so important. She says she wants to give them a kick in the head, because their heads are empty. She wants them to wake up.

The show closes with what starts off as the Sukka version of the stellar Buffalo Stance, but then builds into an absolute banging ’80s-tastic  version when we hear the intro “Will you stop all that f*cking scratching and give me a beat!” Cherry is on freestyle form, decides to take her jacket off for the second time and struts and bosses around the stage. Our mantra is now and forever “No money man can win my love”.

Politics may be broken, but with Neneh Cherry in the house, we are distracted, energised and optimistic. A spellbinding evening with a wonderfully uninhibited artist, it’s fantastic to have her back.