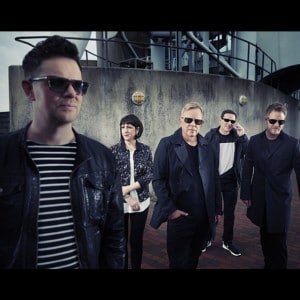 In a year where every man and his dog have been quick to pay homage to New Order and Joy Division‘s influence (why, Interpol can’t get through a review without someone pointing out their musical debt to Ian Curtis and company), it’s fitting that the veteran Mancunians were the Friday night headliners at the inaugural Wireless Festival at London’s Hyde Park.

The Wireless Festival was held during the same time as Glastonbury, and while there was no danger of trenchfoot as seemed to be the case at Somerset, there was no escaping the fact that this was a far more corporate event that Farmer Eavis’ little shindig. Everywhere you turned there was an O2 logo (this year’s sponsors), including one tent that could only be entered by O2 customers – if they sent a hugely expensive text message of course.

However, it was an impressive line-up, with Kasabian, Keane, both sets of Wainwrights and Basement Jaxx all slated to appear over four days. Friday played host to The Bravery, Graham Coxon and Moby amongst others – yet a mixture of heavy rain and a late arrival in London meant that this reviewer arrived just in time to see the shiny headed little vegan fella exiting the stage.

“It looks like we’ve brought the rain with us,” said Bernard Sumner as he walked onstage. “Well, we are from Manchester”, and launched into Crystal. The sound was terrific and the audience were appreciative – even if the big screen meant that we could not escape the fact that age is rapidly catching up with Sumner and Peter Hook, with Hooky in particular looking more like someone’s dodgy uncle every day.

Yet he’s still every inch the rock star, and bestrides the stage like a Colossus. With his bass guitar in the trademark low-slung position, he strolled over every part of the stage, at times playing far away from the rest of the band at either wing of the stage. He even had time to berate the mosh-pit at the front of the stage (“fuckin’ hell, you lot must be 40 if you’re a day!”). He may not be the lead singer, but Hooky’s still the star of New Order.

Bernard was on form too, if spectacularly grumpy. He enlivened several songs with some real ’embarrassing dad’ dancing, and inbetween numbers railed against “wank-faced journalists… apart from the ones who like us”, and made a hilariously insincere “thanks to our sponsors” message.

The set list covered all ages of the band (although sadly there was no room for anything from the band’s finest album Technique), from well loved classics like Regret and True Faith, up to some less celebrated gems like the lilting, bittersweet Run Wild from the under-rated Get Ready album.

The highlight of the band’s set though was still to come, as the unmistakable opening chords to Love Will Tear Us Apart floated across the park, with the band doing justice to a true classic of our time.

There was no room for World In Motion (maybe they were saving it for their Glasto appearance), but two more Joy Division tracks were wheeled out for the encore in the shape of a brooding Atmosphere and a rather bored sounding She’s Lost Control before a superb version of old classic Temptation re-energised the audience.

Yet the moment everyone was waiting for arrived when that drumbeat started and we were immediately whipped back to 1984. “Yeah, guess which one this is…Blue Fookin’ Monday” yelled Sumner, before reassuring us that “we love it though”. Despite the thousands of times they must have performed the song, they still looked as if they were enjoying every minute, especially with Hooky bashing seven bells out of a synth drum kit.

It was a fine end to the first day of a festival that may never become a serious rival to Glastonbury, but may well attract the music-loving city dweller who can’t bear the thought of camping in rivers of mud for the weekend.