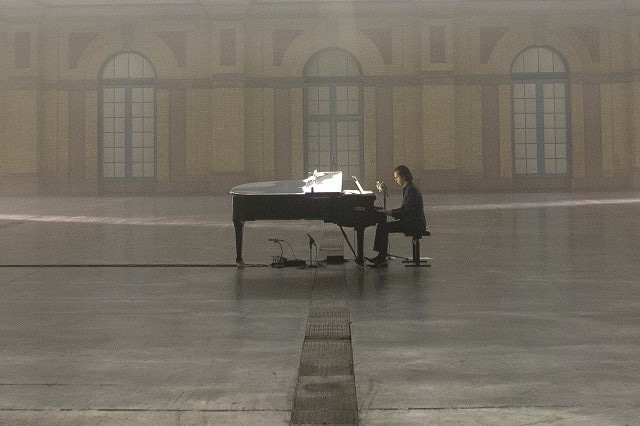 Earlier this year, Nick Cave & The Bad Seeds were planning a tour of the nation’s arenas, promoting last year’s extraordinary Ghosteen album. How could these impossibly intimate songs, drenched in grief as the spirit of Cave’s late son hung over them, possibly be heard as effectively in a cavernous arena?

Well of course, the answer to that is that we’re still not sure. With the global Covid-19 pandemic and subsequent lockdown came the indefinite postponement of all public performances. With that situation unlikely to be resolved anytime soon, the new normal has become communal viewing of live streamed gigs, often from the performer’s home.

Trust Nick Cave then to do something a little bit different. Idiot Prayer was a solo performance from Alexandra Palace, streamed at 8pm on Thursday 23rd July featuring Cave, a piano and a socially distanced camera crew of two. From the moment that we see Cave pad his way through Ally Pally’s foyer and make his way into the venue’s West Hall where his piano is waiting for him, it’s clear that this is a bit of an event.

It’s fair to say that the setlist is a bit of a surprise – with a solo, piano-based Cave performance, you’d expect a reliance on the more stately ballads, yet in-between songs like Brompton Oratory and Nobody’s Baby Now, we’re treated to startling re-imaginings of Bad Seeds and Grinderman songs. So the euphoric surreality of Palaces Of Montezuma is transformed into a low-key lament, and best of all, an impossibly intense Papa Won’t Leave You Henry with Cave vigorously pounding the piano keys.

What takes Idiot Prayer up to another level is the gorgeous camera work from Oscar nominated cinematographer Robbie Ryan. With a mix of close up and wide shot, Ryan manages to convey the impossible size of Alexandra Palace while never foregoing the intimate aspect of the performance. During Waiting For You, the camera remains unflinchingly upon Cave, and the grief racked on his face as he’s singing to his late son becomes almost uncomfortable to watch.

It’s that emotional aspect that makes Idiot Prayer stick so long in the mind. When Into My Arms is followed by The Ship Song, it’s almost possible to sense a communal sob around the world-wide audience. Strangely, the silence that greets each song seems to heighten the emotion – instead of the cheering and applause that would normally greet these songs, there’s a stillness. Cave doesn’t say a word between songs, and now and again just glances at a lyric sheet. At times, it feels almost intrusive to be watching, especially when we occasionally get a glimpse of the camera crew.

Then, after a suitably stately version of Galleon Ship from Ghosteen, Cave stands up and simply walks through an open door to the side, a glimpse of light illuminating his way. Idiot Prayer is no substitute for seeing the Bad Seeds experience live and up-close, but if this is to be the future of gigs for now, the bar has just been lifted considerably.