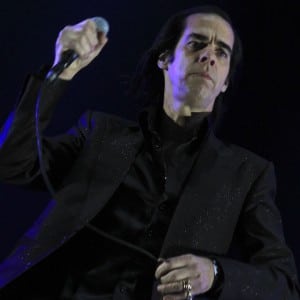 Recent album Nocturama – ‘Nick Cave lite’ – got rave reviews from the critics and howls of pain from hardcore fans. Blixa’s gone, the first major change to the Bad Seeds line-up in years. Are the two events connected? Who knows. Will we see Radio 2 style audiences at live performances from now on?

Hanging around outside Hammersmith Apollo (as you do) it’s a relief to see that the gathering hordes are just as ill-assorted (and sometimes just plain weird) as always for a Nick Cave gig, mostly wearing black, with plenty of representatives from down under.

Cave bounds on to the stage with great energy, right on time (one of the benefits of the Hammersmith Apollo). He’s relaxed, confident, in a friendly, expansive mood and happy to come to the front of the stage and grasp hands. Looking good. He goes to the piano and we’re off – Wonderful Life, one of three tracks from Nocturama during the set, and one of the best – not a rip-roaring rant of a song, but it’s got pace and volume and is a good up-beat opener.

As if to add reassurance that some things never change, next comes Red Right Hand, the classic example of Cave’s ability to write songs that menace and thrill. It gets a new tempo and a virtuoso performance from the man in black, shimmying around the stage as only someone with long, long legs and non-existent hips can do.

One slight doubt creeps in at this point – is something wrong with the sound? It’s mushy – normally one of the features of the Bad Seeds is that their individual musicianship comes across loud and clear.

A rollicking version of West Country Girl confirms that although this is going to be a high octane gig, the sound balance is wrong. Cave’s voice is in fine fettle but musical elements are lost in the maelstrom. Not a problem in the quieter numbers – Hallelujah, a fabulous, creepy version of Watching Alice, a rare chance to hear that weirdest of songs, Cristina the Astonishing. On a souped-up version of Henry Lee, however, it means cacophony without the usual refinement of musical innovation.

Difficult to comment on the Bad Seeds’ form, therefore. Blixa isn’t mentioned other than to say he’s gone, it’s sad, and “We can do anything but the Weeping Song.” Mick Harvey and Thomas Wydler are there as always, undemonstrative but sure. There’s someone new on keyboards but he isn’t introduced. And Warren gets stranger and stranger mid-stage, fiddling like some demented leprechaun, all knees and elbows and finally flinging his bow away and using his violin like a banjo.

So it’s a good gig – and a typically generous one from Cave in time and energy – but not a great one. Some treasures – Wild World (an old Birthday Party song), Do You Love Me, From Her to Eternity. Some disappointments, because of the sound – especially the final encore, The Ship Song, which lost all definition and descended into noise. But at least we were spared Rock of Gibraltar.