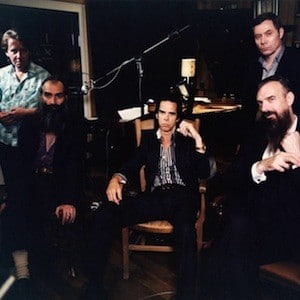 Push The Sky Away is a majestic record. It’s slow, unsmiling and doesn’t give two shits whether you like it or not, you oily pleb. So both in name and in stately baroque atmosphere, Her Majesty’s Theatre is a fitting place to launch The Bad Seeds’ 15th album.

Also, as Cave himself notes on the making of film that is screened in place of a support act, it’s an album constructed around a couple of “big” songs. The corollary of which must be that the rest of the running order is made up of ‘smaller’ songs. And, let’s face it, when you’re stood in front of a baying audience, size matters.

While it’s true that tonight the gigantic raging torrents of Push The Sky Away are stunning, what’s possibly more impressive is the shallower tributaries of the album don’t get lost. It means that if anything, this album that you didn’t think would work in a live setting actually comes to life on stage. It means that as they play through in track order (“It’s got kind of a narrative thrust to it” Cave remarks, somewhat dismissively) the effect is dazzling.

We Know Who U R is incredible. Simultaneously threatening and comforting, like a duvet with fangs. Warren Ellis, as he does all night, drifts in and out, adding embellishes and finishing touches. A flute here, a scream of guitar there, a twinkle of Korg over by that; the impression that Push The Sky Away gave of him becoming more integral to the Bad Seeds’ output is reinforced here.

But actually, everyone, including original Bad Seed Barry Adamson (filling in for the ill Thomas Wydler) is flawless. Bounding with confidence and enjoying it massively. Although no one more so then their black clad leader. Seeing Cave live, seeing him thrusting at the audience crooning “I’m transforming / I’m vibrating / Oh look at me now” as Jubilee Street (gigantic raging torrent number 1) builds to its apocalyptic climax, or gradually unfurling the serpentine tale of Higgs Boson Blues (gigantic raging torrent number 2) is a marvellous thing to behold.

New album introduced, new tricks suitably performed, Nick Cave & The Bad Seeds then offer a staggering demonstration of some old ones. A visceral From Her To Eternity, complete with strobe-lit Ellis conducting the string quartet with the kind of viscous stabbing motions that make it look like he’s trying to see off Janet Leigh in the shower, a gorgeous, hymnal O Children (accompanied by actual children), the macabre gothic nursery rhyme that is Red Right Hand, all sound astonishingly vital. Cave even manages to shrug off forgetting the words to the closing Stagger Lee with a grin.

As well he might. For a band to be capable of this after 30 years and 15 albums? Majestic doesn’t come close.