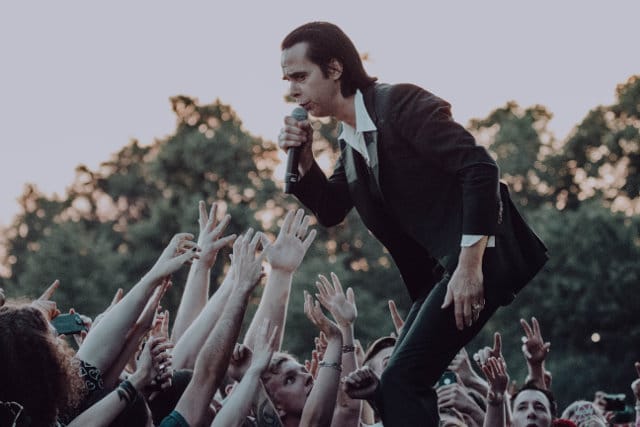 ‘Behind every great man, there is a great woman,’ goes the cliche: in the case of the final night of the first All Points East double-weekender, they stand shoulder-to-shoulder. Nick Cave may have been at the top of the bill, but the day’s line-up was refreshingly plentiful with female talent.

Whenever we see Shame, the stage is bigger than the last time, and today they take a surprisingly early slot on the main stage. Charlie Steen, now sporting peroxide hair and looking ever more like a tribute to Eminem, is again wearing his one-piece white overalls/boiler suit/New Cross astronaut outfit, the top half of which is soon removed. The band’s often frantic movements are only slightly subdued in the afternoon’s searing heat, and a short set time leaves no room for Angie, but a new song takes its place among a set otherwise familiar to fans of their tour de force debut album Songs Of Praise. Steen, whose dance moves can confidently be filed under ‘individual’, dives into the crowd during finalé Gold Hole and somehow manages to sing the words while being held aloft by many willing hands. Shame surely made new fans today. 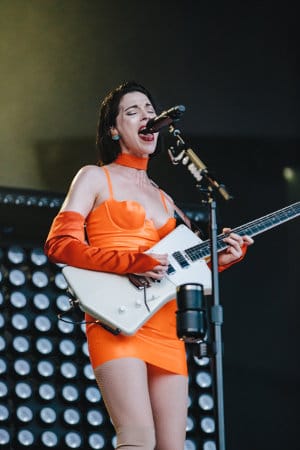 Youthful crooner Matt Maltese unleashes his debut album Bad Contestant this week, and took to the small but perfectly formed Firestone Stage to showcase it. Seated throughout, the better to tinkle the ivories, he was joined by a guitarist over his left shoulder and a bassist over his right. Choice cuts Like A Fish, Greatest Comedian and Nightclub Love did nothing to disabuse the notion that here is the missing link between the lyrical wit of Jarvis Cocker and the ironic self-references of Father John Misty, even if his stage presence calls neither readily to mind. A set likely to work well in small indoor venues, it somehow also worked perfectly in the bright sunshine.

Over on the North Stage, Nadine Shah confirmed she is a no less impressive live prospect with a very different performance and a huge crowd. Drawing heavily from last year’s superb Holiday Destination, her rich voice appeared even more powerful and stirring than on record with a wonderfully seething version of Yes Men and through the menacing skulk of Evil. As visually engaging as she was vocally, she prowled the stage while brilliantly backed by her band. Although her music shares little with the later billed Patti Smith, the politically minded ferocity of her message – not least a dip in to Israel-Palestine waters – reveals a certain kinship.

Antipodean rising star Courtney Barnett regaled the crowd, at first glance, not with grand political statements, but with her distinctly micro-focused narratives. Nevertheless, her latest record has seen her songwriting mushroom beyond the sharply observational, everyday life tales to larger issues, like Nameless/Faceless which transposes the Margaret Atwood quote (“Men are scared that women will laugh at them/Women are scared that men will kill them”) for the #MeToo era. Tell Me How You Really Feel has seen Barnett come of age as a songwriter, and on this set’s evidence as a performer, too. Highlights include the slow-burning opener Hopefulessness, through the bounce of City Looks Pretty, to the exposed vulnerability of Need A Little Time; early into the album tour and the crowd are already singing along, word-for-word. Her small, yet excellent, back catalogue isn’t neglected either, with a brilliantly doleful Depreston and the trademark deadpan Avant Gardener proving to be particular highlights. Throughout, her guitar playing is as distinctive as her lyricism, and by the time she concludes with a blazing Pedestrian At Best, Barnett reveals she is a quietly confident performer whose live prowess lives up to her enviable talent as a songwriter.

Over at the North Stage, St Vincent, solo on the stage of the Brixton Academy on her last visit to this city, has rediscovered her live band. While Annie Clark is well able to control a stage on her own, and has done throughout her storied career, having bemasked automatons around her allows her to shimmer between guitar goddess and electropop princess with precision. Bold, brightly lit neon visuals extend from her orange costume to six differently coloured but otherwise seemingly identical guitars which she rotates between as she showcases recent album Masseductaion, with its title track, Los Ageless and set closer Slow Disco going down especially well with the crowd. There’s space too for older material, with Digital Witness amongst the highlights. 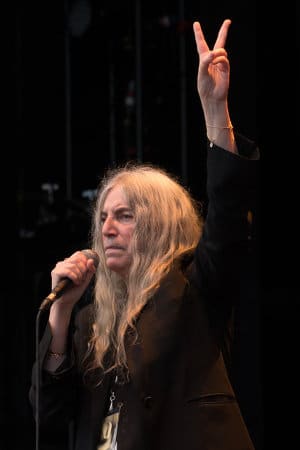 Patti Smith’s performance largely trades her reputation as a punk high priestess for hippy idealism. Opening with a section of counter-cultural icon Allen Ginsberg’s famed poem Howl, she swiftly segues into a storming rendition of People Have The Power and later a cover of John Lennon’s Mind Games. There’s an earnestness about her performance that perhaps no longer exists in this generation’s politically engaged artists, with the lack of harsh edges feeling like an impossible feat for newer acts. Equally, the corporation-bashing monologues feel a little out of place at a distinctly corporate bash which sports a Pizza Express concession. That said, All Points East haven’t shied away from booking such acts, so credit where it’s due.

And as Smith draws the set to a close with the matchless trio of Land (Horses/Land Of A Thousand Dances), Pissing In A River and Gloria she sends a rumble through the crowd and ignites that old punk spirit. Gloria in particular, with its scorching opening line “Jesus died for somebody’s sins but not mine”, and almost gospel-like build, prove that firebrand soul continues to burn brightly, 40 years after the release of Horses.

It’s left to Nick Cave & The Bad Seeds to close proceedings, and it’s hard to imagine a better performer to do so. In spite of the heaviness associated with their latest record, Cave presented one of his most inclusive, warm, and crowd-pleasing performances to date. Throwing out choice picks from across their near faultless back catalogue, he has the crowd eating out of his hand from start to finish. A Herculean From Her To Eternity proves his fire has not dampened with age, and yet the stillness of the crowd during Into My Arms was just one example of his skill at truly touching love songs. His control over the audience is masterful as he slowly erodes the boundary between performer and audience, with many of them joining him soon on stage for as filthy and intimidating Stagger Lee as he’s ever performed. Playing the crowd like a conductor, he raised the energy levels for a rousing Deanna, then sent everyone off into the night with the hypnotic and floating Push The Sky Away.

But the set will likely be remembered for special guest Kylie Minogue for a pure and dazzling performance of Where The Wild Roses Grow, with the dark and light hues of the glorious murder ballad present and correct. As she leaves the stage, Cave quips “I should be so lucky,” surely a line only he could get away with, underlining what is surely an enduring affection between the two artists on this, her 50th birthday week. There are very few who can currently match Nick Cave & The Bad Seeds live, with the band as ever on mighty form behind their one-of-a-kind preacher man.

All Points East’s sprawling nine days may have struggled with identity in its inaugural year, but the final day felt thematically consistent. The artistic talent on offer meant we were never going to be able to see all of it – sadly missing Marika Hackman at the Jägerhaus stage, the Psychedelic Furs at the North Stage and the Black Lips on the main stage, to name but three. But above all, this sell-out Bad Seeds headliner show proved there is no excuse not to put women at the forefront of festivals. Despite what the naysayers argue, there is a wealth of exceptional female musicians, they sell tickets, and in this instance, made for the best overall lineup of the festival.