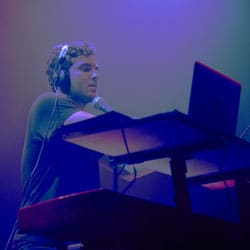 If austerity is the buzzword of these times, you could do worse than watch 22-year-old Nicolas Jaar’s stock rise. It involves little risk, a ripe sense of privilege and you’re guaranteed reward.

Whilst the scene outside the Roundhouse looks like a traders’ floor of punters scrambling to get in through one door on an especially bone-chilling London evening (brownie points go to the clever door staff) inside is just as busy. It’s a measure of how far Chilean born, New York resident Jaar has come in the past 18 months, with a host of EPs, remixes and his first album Space Is Only Noise – one of the most original albums to drop in 2011.

It’s not often that the gap between performance and production is bridged, but Jaar has pretty much nailed it. On his festival tour last summer he managed it with eye opening style, backed by a full live band. Tonight for much of the show he flew solo, with a laptop, mixer, keyboard and visual projections in tow. It worked well for the most part, the earlier portion of the show leaning more to the atmospheric and ambient, all brooding basslines sewn up in Jaar’s nifty key work, melding comfortably with the more upbeat and club friendly elements of the show.

Dave Aju’s uplifting remix of Space Is Only Noise has worked its way into the set, while Stay In Love’s superb cut of The Searchers’ ’60s hit Love Potion No 9 had the floor and balcony all moving to its energetic tech house rhythm. The likes of the bluesy Too Many Kids Finding Rain In The Dust and the bouncy Mi Mujer also remind that, as a performer Jaar has a voice too, shimmering through the Roundhouse’s vast space.

Particularly noticeable tonight is the sheer scope of genres and styles that mingle in and out of each other, from slow drippy chill out to crunching static electronica, pounding basslines or stripped folk and blues. It’s like a blender whirring away as each ingredient is tossed in, though you only sample the flavours with each sip you take in.

The one disappointment was not seeing this delivered by his full band, who kept a never ending and interchanging flow of sound. Although accompanied by a guitarist for part of the set, that experience was somewhat lost with the breaks he pocketed tonight.

Jaar is due to go back to university to continue his studies in Comparative Literature shortly after wrapping up his European tour. Judging by his ever expanding and shifting sound, you can hedge a bet that his future is shored up pretty securely.