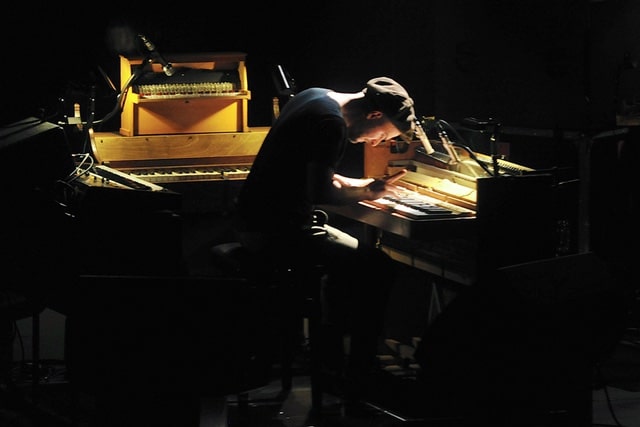 Such was the demand for tickets for Nils Frahm’s three shows at the Barbican that a matinee show was squeezed in to accommodate those eager to see him. This ticket-buying frenzy proved that this unassuming Berliner is still very much a musician that captures the imagination of music fans across many genres, be they modern classical aficionados, jazz heads, alternative guitar band fans seeking another sort of live thrill, or traditional classicists intrigued by this new form.

Frahm always has an impressive on stage set up, and tonight is no different, surrounding himself with banks of pianos, analogue synths and organs. Members of the audience in various states of fascination take pictures of them long before Frahm appears. When he does we’re reminded that he still has that modest stage presence. This first show of course draws heavily from new album All Melody, but it also sees him incorporate highlights from his past.

Sunson stands out early on, showing that the greater volume of his live shows adds an extra dimension to these new tracks. He plays multiple instruments at once, adding some nice improvisatory touches as he goes along. As he plays he hurdles monitors and sidesteps instruments as he flits around his musical bunker. He’s like a club DJ that prefers to use organs and synthesisers to build up momentum rather than records. 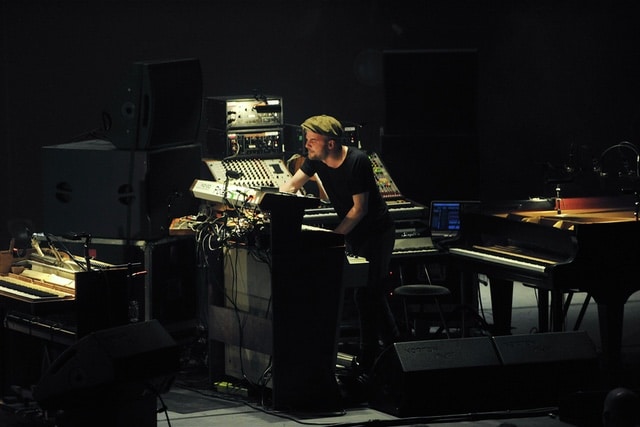 He then progresses to the delicate, zoomed-in melodies of Fundamental Values, followed by My Friend The Forest, which starts out as a piano-based lament but ends with skittering beats. He pauses to talk to the crowd, declaring it “both great and scary to play London” before asking everyone to “enjoy the flight”. It’s an apt metaphor in many ways. These early moments show how unified his set is, flowing beautifully with each piece being allowed to breathe and perfectly connected to the next.

He travels further back in his career for Familiar, and it is these moments of pure piano that still make the heart leap. Human Touch may involve a little too much in the way of ultra-patient build up, but Forever Changeless fares better, seeing high intensity beats layered on top of dolorous organ. He later stops to talk about the new organ he constructed himself, admitting he didn’t like it at first. It’s possible to see why this might have been the case, with some of the ways in which he employs it tonight a little jarring. Arguably, he doesn’t need to force it into tracks as often as he does, but this is a rare negative in tonight’s show. 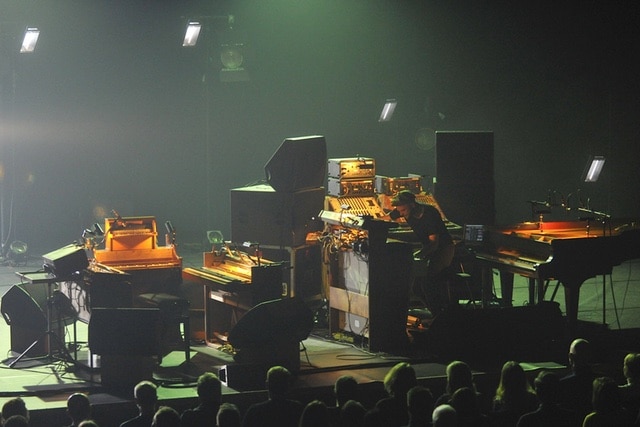 Of the new tracks, All Melody benefits the most from the live treatment, sounding bigger and far more convincing than on record. #2 is equally amplified and has added bite and the way in which he filters samples of choral voices into the track further confirms his transformative live abilities. It segues into crowd favourite Hammers, which sees nuance musically played off against direct action.

Says is introduced in self-deprecating fashion as he imagines a composition teacher remarking how it’s just “one chord played over and over, it’s not a track, it’s just…nothing”. In reality it’s a microcosm of his set, an underwater ripple expanded into a towering structure, a tone poem for the stars. The reaction from the audience suggests they wholeheartedly approve.

He finishes with two classics from his past – the percussive Toilet Brushes and the onrushing, glowing piano of More. The latter in particular shows off his own forms of minimalism and virtuosity, and gives rise to thought on whether it is too pretentious to coin the term ‘Frahmian’. It caps off a measured, pristine show in which he doesn’t put a foot (or finger) wrong, proving the live environment is still where he excels most.