by Steven Johnson
published: 26 May 2015 in Live Music Reviews
Tweet 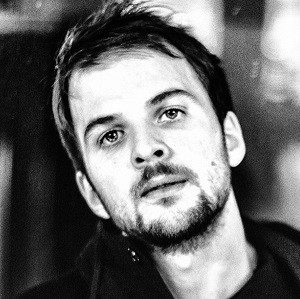 “Shhh!” “Shhh!” “Shhh!” As Nils Frahm takes to the Roundhouse stage and settles down at the piano a higher than average number of the audience are keen to remind others to be quiet (possibly having read the polite printed requests for respect during the show that have been attached to the doors to the venue). It goes on for so long that it’s actually left to Frahm himself to ‘shush the shushers’ before beginning. This, and the fact that the silence lasts so long into the show proves the high regard in which he is currently held (not to mention how also how popular he has become). His progress, from occupying third on the bill at modern classical concerts at small London churches to two sold-out shows at one of the city’s premier venues, has been steady and considered rather than meteoric but he’s now more than comfortable in these higher profile surroundings.

He begins with Ode from latest album Solo, which sounds even more patient and delicate than on record. Most of the audience seems to collectively crane their necks to get a better view, revealing not just a fascination with his music but a similar level of interest in how it is being produced. It’s the only track from Solo to feature in the set tonight – the opening stages sees him mainly concentrate on new material. What follows bodes well for his next album (despite him self-deprecatingly saying that the show feels like a “paid rehearsal” for the new material after a momentary straying during the fluctuating, binary patterns of a new piece played out on the organ).

Dust-coated, quiet fantasies grow into darker, more shadowy forms as they progress. Later, Warp-style electronics emerge and are gradually transformed into denser, more imposing sounds (earlier, support act and fellow Erased Tapes signed trio Dawn Of Midi had impressed in a similar way, fashioning a sound close to electronica from double bass, piano and drums). The fact that the organ and one of the pianos used tonight were self-built shows him to be not just a musician but also a constructor of sonic tools.

In terms of sound covered it’s his widest and most expansive show to date. Whereas last year’s shows were maybe focused primarily around the dub influences found on Spaces tonight he’s keen to explore different avenues and take more risks, even if they don’t always quite work out. Musical warmth has always been a key feature to his sound but at times tonight a colder, more disengaged (if still captivating) aspect creeps in. The short, introspective sonata-like Over There, It’s Raining sees him return to more familiar ground.

Hammers, Toilet Brushes and More are all reminders of the unadulterated intensity of old and proof that he has always dealt in creating personal musical epiphanies. Says meanwhile still sounds like what observing earth from deep space might feel like. As it progresses it’s like we’re experiencing the sonic equivalent of a slow, beautiful re-entry into earth’s atmosphere. It’s a suitable comparison for a musician who keeps demonstrating that he knows how to hit musical and emotional targets with unfailing accuracy.