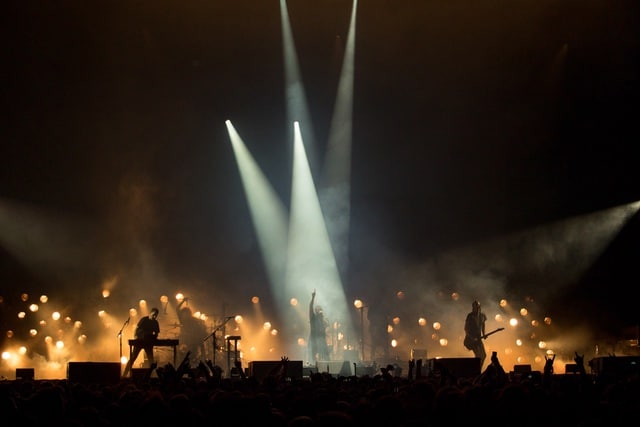 From Royal Festival Hall to Royal Albert Hall. Three days, two dates, a mini-tour of venues frequented by the Queen: what a way for Nine Inch Nails to kick off their European tour – a demonstration of Trent Reznor, arch royalist. That’s an unsubstantiated accusation. But both that first show and this second demonstrate that, as shows go, a Nine Inch Nails show is still the show to show other shows how to show. You know?

It would be exceedingly easy for Nine Inch Nails to fall into the nostalgia trap. They have a back catalogue spanning three decades. They have a fanbase who’ve stuck with them through thick and thin, through screaming nihilism and black-streaked eyeliner to $300 box sets and Oscar nominations. And the timing is ripe for that sort of thing.

Anniversary tours, reissues and revisits have become the norm. All it takes to push an enormodome band to become ginormodome band are the words “anniversary” and “played in full”. The words “why don’t they just play the whole of The Downward Spiral” may have been heard, hanging accusingly in the air – an accusatory, damning summation of a doomed path towards artistic hegemony, fixated on the idea that the old times were the best times, that there is nothing new to see or do or hear.

But it is a pretty half-arsed way to go about things. And Trent Reznor does not give, and has never given, the impression of being a man who likes doing things in a half-arsed way – as many a record label exec will undoubtedly attest. So they manage the neat trick of making tonight not about nostalgia. They make it thrilling and raw and wildly exciting. They blend the new, the slightly less new, and the downright old into something supremely coherent. Which includes four, yes four, naysayer muttering to your friend in the bathroom, songs from The Downward Spiral.

And let’s be fair, March Of The Pigs still rages, howls and tramples all in its path. As does Wish, 25 years old, but here delivered with a pummeling intensity which leaves you desperately apologising for whatever wrong you did it – a confession of wrongdoing which is undoubtedly extenuated by the blinding strobes which accompany it.

If that’s the more traditional, industrial, banging and clattering end of the spectrum it is given further texture and nuance here. There’s no doubt due to where Reznor’s current arc, interests and bandmates have taken him. And there’s no awkwardness with the way they fit in and around the newer things, of which the newest of the new (Bad Witch) is ably represented. It includes a live debut for Shit Mirror, which is rabid and unhinged, and performances of the jittery Ahead Of Ourselves and the Blackstar David Bowie indebted God Break Down The Door: eerie, sad and portentous.

It all just sounds very present. Very of the moment. Some of that is probably a reflection on the time, rage, loathing and regret being key emotional pieces for the current season but it’s also testament to Reznor’s need for constant artistic motion. In terms of niggles it did seem like the encore was a bit rushed. Hurt was the poignantly stinging singalong, but The Day The Whole World Went Away did its build, but then just seemed to expire without the expected cataclysmic fanfare. But they’re minor, trivial quibbles. From Royal Festival Hall to Royal Albert Hall – three days, two dates, 10 stars and still one of the most uncompromising and unflinching live acts you can see today.

Nine Inch Nails played: Branches/Bones Wish, Less Than, March of the Pigs, Piggy, The Frail, The Lovers, Reptile, Shit Mirror, Ahead of Ourselves, God Break Down the Door, Parasite, Copy of A, I Can’t Give Everything Away (David Bowie cover), The Background World, The Great Destroyer, Burning Bright (Field on Fire), Digital (Joy Division cover), The Hand That Feeds, Head Like a Hole Encore: Survivalism, The Day the World Went Away, Hurt