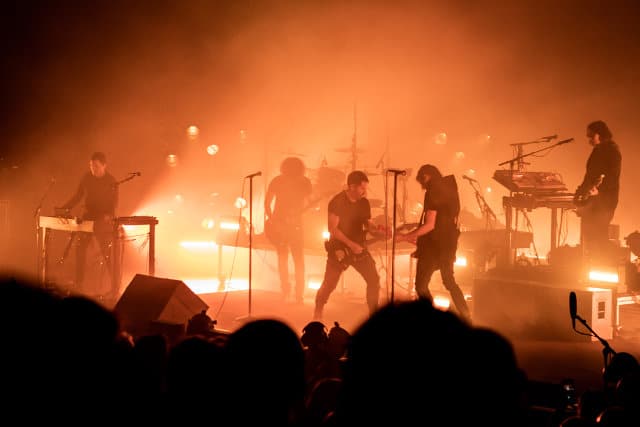 Trent Reznor explodes on to the stage. Strobe footlights flash furious and immediate as the band launch straight in to Somewhat Damaged, a track made infamous by the CIA supposedly using it to ‘torture’ detainees at Guantanamo. “Too fucked up to care anymore,” he roars as propulsive, serrated guitars cut through the air. The all-seated audience is already on its feet, returning the energy viscerally pouring from Nine Inch Nails in spades.

The first four tracks, delivered in urgent order, are all from 1999 double album The Fragile. The drums-free guitar workout The Day The World Went Away is towering, stentorian, sky-scraping, but even it is bested by The Wretched, which starts with Reznor solo on piano and builds into a foreboding, relentless, industrial-scale steamrollering colossus, harvesting souls from far and wide. “It didn’t turn out the way you wanted it to, did it… now you know this is what it feels like,” Reznor screams from his very guts, and arms-aloft forms howl the words back at him. Chuck Palahniuk once described the track as “an active, aggressive, angry lack of caring” but it’s one of several moments in this set when furious rock is meticulously married to danceable synth pop to make something completely epic – and damned sassy. They return to the album later with the slow-it-right-down-and-stop Even Deeper. 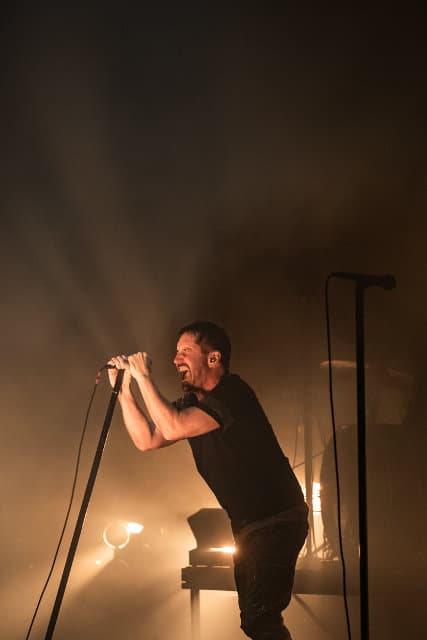 Reznor, in Nine Inch Nails regulation uniform of tall boots, grey trousers and a black top, operates in a corridor of sorts fashioned between twin rostra set up for drums and bass, with the front man’s keyboard and console slotted in between them, and Atticus Ross to his right with guitar and synths. A multitude of stage-mounted lights all around backlight the band, rendering further visuals unnecessary. There’s a shout out to longtime producer Alan Moulder, who is apparently in the house, and who Reznor calls “another member of the band,” and an acknowledgement and vote of thanks to The Cure’s Robert Smith, curator of this year’s Meltdown – although unlike in some of the programme’s other shows there’s no Cure cover in this set.

We get choice cuts from his three-decades-old debut Pretty Hate Machine – the by now necessary piano-and-synth calm space of Something I Can Never Have gets a huge cheer – and The Downward Spiral, from which the frenetic, thrashy March Of The Pigs sounds as vital now as it did on release. I Do Not Want This gets put through its paces later in the set.

They are followed by a reminder that new record Bad Witch, the third of the are-they-EPs-or-albums trilogy following Not The Actual Events and Add Violence, is released this very day. From it we get the catch-your-breath ominous I’m Not From This World, the frenziedly distorted Ahead Of Ourselves and the sax-sampling psychedelia of God Break Down The Door, which features a terrific spinning lighting effect shadowing the band against the back wall, making the stage feel much busier with musicians than it is. 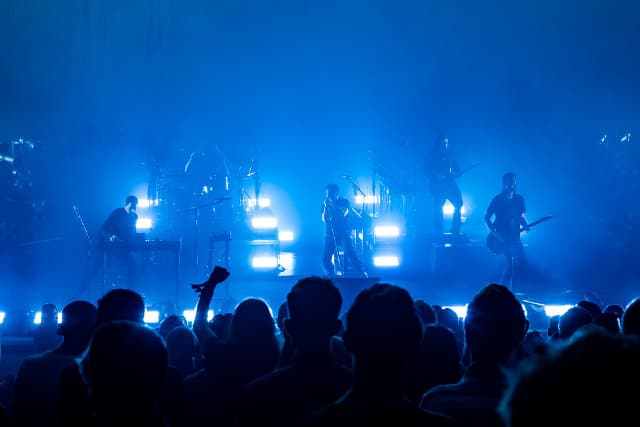 Space is given to acknowledge collaborators. I’m Afraid Of Americans – “I’m afraid of Americans, I’m afraid of the world, I’m afraid I can’t help it” – serves the dual purpose of co-opting the spirit of the late David Bowie, with whom Nine Inch Nails toured in 1995, and turning the spotlight on the United States in 2018, in a week during which the treatment of child migrants and Donald Trump’s reaction to the furore became the latest mind-boggling episode of this increasingly surreal administration. In the encore, Metal finds Reznor adopting Gary Numan’s exact stage poses, underlining the mutual respect the two artists have had for each other down the years.

Following The Downward Spiral’s sludgy, churning Reptile, it only remains for Reznor to introduce his band, apologise for their jetlagged state – it was not at all noticeable – and play out into the night. While the late Johnny Cash’s affecting cover is arguably better known, Hurt remains one of Nine Inch Nails’ finest moments in its creator’s hands, and it duly ends the set with a huge, uplifting singalong, underlining that Reznor’s music, often pigeonholed as industrial rock, has always sported genre-straddling variety, nuance and a full range of emotion and has the power to include, and to heal. Reznor once said “I will never present a show that isn’t fantastic.” This show hammers home that Nine Inch Nails are still living up to that noble statement, and are an absolutely vital live proposition.

Nine Inch Nails played: Somewhat Damaged, The Day The World Went Away, The Frail, The Wretched, Terrible Lie, March Of The Pigs, Something I Can Never Have, Me, I’m Not, Ahead Of Ourselves, God Break Down The Door, The Lovers, The Good Soldier, The Great Destroyer, I’m Afraid Of Americans (David Bowie cover), I Do Not Want This, Even Deeper, The Big Come Down, Less Than, Wish Encore: Metal (Gary Numan cover), Reptile, Hurt