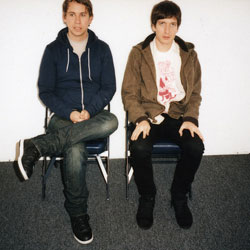 As Californian low-fi punk duo No Age take to the stage the all-ages capacity crowd goes into paroxysms, and doesn’t let up moshing until singing drummer Dean Spunt has crowd-surfed his way out the door and headed halfway down the City Road. However impressive Male Bonding and Abe Vigoda had been on this impressive bill, there was no doubting the headline quality of these particular headliners.

For the uninitiated, No Age are an integral part of the blooming low-fi, shoegaze-influenced punk scene emanating, if you’ll forgive the pun, from downtown LA DIY arts venue The Smell. Along with fashionable LA cohorts HEALTH and The Mae Shi, and further flung groups like the wonderful Times New Viking, No Age are exponents of a genre that the Americans just do better than anyone else – scratchy, ardent, tuneful punk songs that sound like they’ve been recorded at the bottom of a well.

New record Everything In Between has been well received by critics, perhaps thankful that they’ve dialed back the tape hiss and started experimenting with proper production values and – gasp – pop tunes. Live, augmented by a bored-looking synth player, the fuller, richer sound pummels off the walls and shakes XOYO’s speaker stacks. There is a steady stream of flushed hipsters climbing out of the mosh pit, cheerfully acknowledging to all and sundry that yes, they’re still alive, as onstage Spunt screams into his microphone and beats out a primal rhythm on his battered-looking drumkit, and bandmate Randy Randall seems less to be playing his guitar than exorcising its demons.

Teen Creeps, off their first record Nouns, is a primal blast of exuberant punk, all Thermals-style power chords and screaming. Yet, there is more to No Age than batters the eardrum – there’s an experimental, almost proggy background to even the most violently thunderous song which elevates them above many of their contemporaries. That song, like many, ends in an extended wall of reverb, more My Bloody Valentine than Holy Fuck.

It’s also glaringly obvious that the band’s slightly more considered approach to their new record has paid off in spades – while new track Fever Dreaming perhaps bridges the gap between old and new with a loving nod to The Buzzcocks, two of the standout tracks are slower newbies Life Prowler and the beautiful Glitter. The former sounds like The Jesus & Mary Chain channeling The Doors, while the latter is a blissful, feedback-drenched love song with lyrics about “I want you back underneath my skin”. While the two-and-a-half minute thrashes of the early material are joyous releases, there’s much more substance to have in the slow burning material. No Age seem to have come of age.

No Age MP3s or CDs

No Age on Spotify

More on No Age
No Age – An Object
No Age @ XOYO, London
No Age – Everything In Between
No Age @ Grosvenor, London