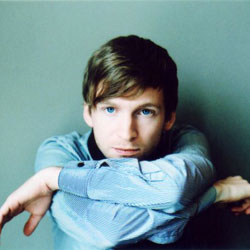 It’s some kind of modern-day shame that young people and full orchestras are so infrequently in the same building at the same time. Outside of the slightly gaudy, if well-intentioned, big venue Classical Spectaculars, and outside of London, when do people this side of 50 get exposed to the kind of grandeur and beauty on show at a night like tonight?

Not a lot, is the more than likely answer. Whether that’s down to the way in which classical music is marketed is anyone’s guess. But if there is one positive to be gleaned from this unfortunate trend, it’s that tonight’s audience – here for both Neo-Classical Icelandic composer, lafur Arnalds and the chance to see a Johnny Greenwood-constructed full orchestra piece – are going to appreciate every moment and nuance of an inspiring night.

Truth be told, the bill is an odd-looking affair on paper. Split into four sections, with, er, more sections in between, and starting at 6:30pm and ending some five hours later, it’s unlikely that this writer is the only person in Manchester’s Bridgewater Hall looking at the programme and thinking: “Bit of a slog, this one.” The fact that Arnalds doesn’t appear until 10:30pm also feels like an odd decision. Before Greenwood’s Popcorn Superhet Receiver is given a rendition, some of Radiohead‘s better-known output floats around the venue’s foyers by way of the Louden Piano Quintet. Taking elements from original tracks like Everything In Its Right Place, Idioteque and Motion Picture Soundtrack, the quintet set the scene rather well.

Those expecting something Radiohead-like from Greenwood’s composition may well have been slightly disappointed, but then this isn’t a night that sets out to patronise anyone. Free of guitars and stacks of amplifiers, it’s a proper appreciation of classically-inspired music given a contemporary tweak. The Radiohead guitarist’s Hitchcockian composition is typically cerebral and replete with twisting and diving strings. It’s a suspenseful and disquieting start to proceedings. Performed meticulously by the young talents of the Royal Northern College of Music and conducted with vigour by Andr de Ridder, the hall is a silent and captivated space.

Avner Dorman‘s Spices, Perfumes, Toxins! follows. Inspired by the three substances, the composition is an extended exercise in percussive brilliance. Backed by the full orchestra but really about the DYAD Percussion Duo Toby Kearney and Dan Jones, who lead the performance like swashbuckling frontmen. Marimbas, vibraphones, xylophones and conventional drumsets are all employed, and though the cacophonous crescendos are loud enough to rattle bodily organs, it’s the quieter arias – inspired by Indian and Middle-Eastern music – that really beguile.

After a stirring performance of Stravinsy‘s The Rite Of Spring and a little more Radiohead-in-foyers indulgence courtesy of the peppy, quasi-jazz fellows from Beats & Pieces Big Band, it’s time for waiflike Icelander Arnalds to take the stage. For some reason, Arnalds looks Icelandic. Whether it’s the grey drainpipes and too-big looking trainers, the “Scandinavian” off-blond hairdo or just his outwardly cool and calm presence, Arnalds is a fine representative for his place of birth. So, Eurovision next then for the Neo-Classical It-boy? Well, perhaps not.

Thankfully, the bright lights, inflated bosoms and sequined spandex of Europe’s annual caper are not in evidence in Manchester’s elegant chamber. The Bridgewater Hall is, in fact, turned into something of a sombre cathedral-like space, as the mesmerising, Gabriel Faur-like melancholy of Arnalds’ new album “…And They Have Escaped The Weight Of Darkness” takes hold. Sat politely at a grand piano – the orchestra as attentive and in anticipation as the audience – Arnalds fiddles with a synth and softly plays the introduction to opening track, ert slin. Violins and cellos caress the piano notes as, almost without thinking, an audience in anticipation becomes an audience enraptured. Melancholy delivered through strings remains a potent force. “It’s the sound of souls crying,” tends to be the clich.

But as well as souls crying, Arnalds’ latest album is the sonic depiction of souls arriving and then departing; whether into darkness or into light, be they good souls or bad. Maybe it takes a morbid soul to connect with music based on such a gloomy premise, or maybe it just asks people to remember they still have one. Aside from the album’s contemplative bias, there are moments of hard fought hope, such as the Sigur Rs-influenced Hgt, kemur ljsi and au hafa sloppi undan unga myrkursins; both elegant and powerful full-orchestra reminders that transcendence needn’t feel so far flung.

Having been enthralled (and slightly spoiled) by an orchestra all night, it’s an odd irony that the night’s most poignant, affecting moments arrive with the least orchestral involvement. Undan hulu’s handful of piano notes and mournful cello bows are enough to carve deep and long-lasting memories; scars this crowd will be happy to wear for a lifetime.