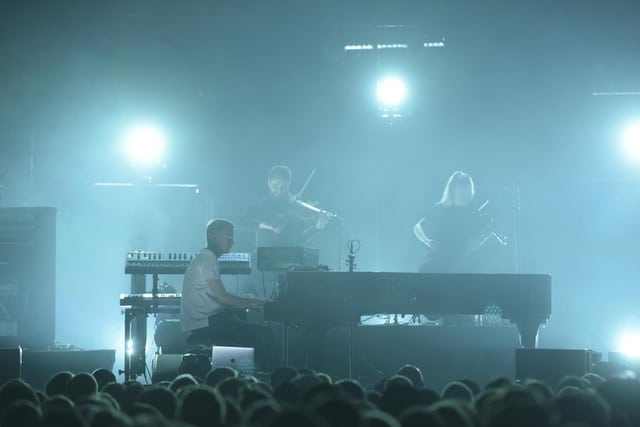 Icelandic composer Ólafur Arnalds‘ new album Re:member, released this August, was a beguiling combination of intricate, impeccable craftmanship and human warmth, capable of scaling heights few of his contemporaries can match. A collection of often beautiful keyboard/strings pieces underpinned by subtle electronica, it achieved extra layers of harmonic complexity through Arnalds’ use of his pioneering Stratus technology, which allows notes played on a main piano to generate alternative notes on two further pianos.

Seeing these pianos ‘play themselves’ on stage was just one highlight of Arnalds’ first of two back-to-back shows at the venerable London Palladium. Arnalds was backed by a live string quartet and the drummer Manu Delago, an Austrian percussionist who had already opened the evening as the support act with his intriguing, otherworldly music played on the hang, a modern, steelpan-like instrument. 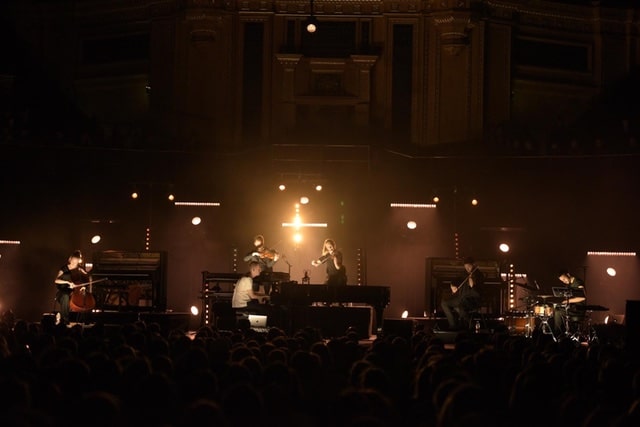 While the other musicians were given plenty of opportunity to show off their talents, Arnalds himself was very much at the centre of proceedings, switching between pianos and synthesisers, seamlessly manipulating an impressive array of sounds and tempos and occasionally pausing between songs to talk to the crowd with an understated, wry Nordic humour. At one point he even dabbled with audience participation, asking the crowd to sing a single note which he then recorded and included in his next song.

The set focused mostly on Re:member material, enabling Arnalds to show off the Stratus technology in all its glory. Importantly though, he didn’t overuse the ‘ghost pianos’ – they stayed silent and shrouded in darkness for large sections of the performance – but when they are let loose, their keys glowing as their notes interplay mesmerisingly with Arnalds’ lead, for example on Unfold or Re:member’s title track, they are undeniably effective. 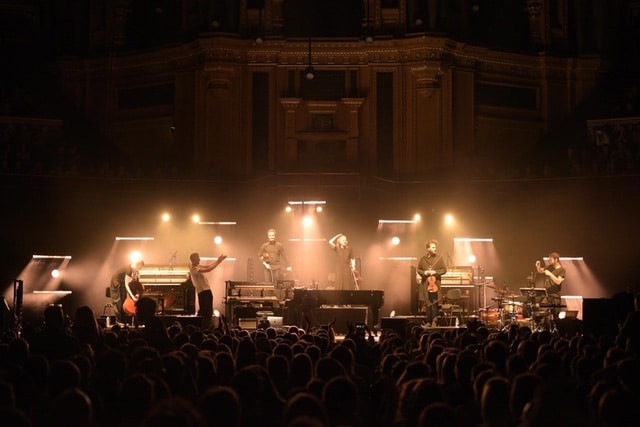 Yet the Stratus technology is just one part of a dizzyingly accomplished tapestry, one which shifts frequently between delicate chamber classical, ambient chillout and vast, Sigur-Rós like soaring cacophonies. As a live artist, Arnalds is at his best when he adds beats to his orchestral music, whether that be reminders of his techno and electronica past or, on this occasion, Delago’s superb drumming, which has elements of jazz and even drum and bass. A mention too for the accompanying light show which was excellent throughout, sometimes softly bathing individual musicians or instruments with pale beams, at other times swirling around the stage in a maelstrom of dazzling rays.

After a tight, impeccably performed 90 minutes, Arnalds returned to the stage for an encore of Lag Fyrir Ömmu (Song For Grandma). Performed alone on the piano, it showed the Icelander at his most stripped back and simple, a fine way to end an evening that demonstrated that this most innovative of composer-producers can create his music with equal virtuosity live as in the studio.