by Michael Hubbard
published: 30 May 2009 in Live Music Reviews
Tweet 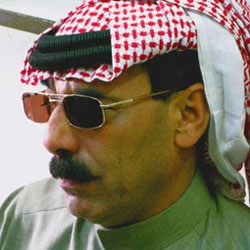 Seattle-based label Sublime Frequencies has been shining light on marvellously eclectic music from south and south-east Asia, the Middle East and north Africa.

It’s a characteristic of the label that the usual venues for cerebral ‘world music’ are eschewed in favour of the street level likes of London’s Tufnell Park Dome and tonight’s venue, a Sunday school hall behind Cambridge’s Unitarian Church.

Of the two headline acts Souleyman, in a red and white headdress, gold-rimmed shades and a black robe, is first up. In his native land, where there is no infrastructure for touring, Souleyman and his band pitch up at weddings and regale guests with addictively uptempo four-to-the-floor party music. He’s been releasing cassette tapes of his recordings since 1994 but is only now coming to western ears thanks to Sublime Frequencies.

With scarcely a let-up in pace in the first four numbers, it’s not long before the temperature nears Syrian standards. This is music to shed pounds to, though in amongst the fitness regime numbers are Iraqi Choubi and other Arabic, Kurdish and Turkish styles which, without translation, rather blend together unnoticed but allow the odd breathing space between the more frenetic material.

With him on stage is the serious-looking Rizan Sa’id, whose frantic, shrill and overdriven Arabic keyboard stabs and backing beats provide the basis on which a baglama saz player, also seated, and Souleyman’s quickfire vocals, build. With them is the curious, surly figure of Mahmoud Harhi, one of Souleyman’s group of poet-lyricists. He divides his time between opening and closing Word documents on a laptop, whispering words into Souleyman’s ear and clapping out of time while looking bored. As the musicians performed staggeringly dextrous feats with their instruments and Souleyman struts about in the audience while all around him flail, Harbi stands on stage stock still, a lost presence in the centre of it all, as bemused by the audience as they are by him.

But all eyes are on Souleyman as he shouts “aaaaaaaaAAAAAAY!” between poems. It works as a kind of Middle Eastern take on the cranking-up-and-letting-go technique DJs use to whip a crowd into a frenzy. In Syria wedding guests link arms and boogie along in what looks for all the world like a line dance (see the Leh Jani video, below). Here the dancing response is rather more, shall we say, individualistic; hair flies, limbs shake and grins beam. Having got the audience high without recourse to chemicals, Souleyman’s exit sans encore causes howls of good-natured protest.

Group Doueh‘s music is built around band leader Bamaar Salmou (aka Doueh)’s electric guitar and acoustic tinidit, a Moorish four-stringed lute he uses to start his set. Compared to what went before it is of a decidedly sanguine pace; as such Doueh’s set was rather like the sorbet to the side of beef. But unlike Souleyman’s crew Doueh, his wife Halima Jakani on vocals and tbal (a hand drum), smiley front man Bashiri Touballi and Doueh’s son Jamaal Baamar on keys all seemed delighted to be playing.

Their raw, unrefined Saharawi desert blues music, like Souleyman’s recordings also popularised in their local market on cassette tapes, most closely recalls fellow desert dwellers Tinariwen. But the addition of Halima and Bashiri’s call-and-response vocals take the music to a more intimate place and the mood veers generally in an optimistic, major-chord direction. Where the Touareg conjure images of campfires, camels and huge star-filled skies, Group Doueh, like Souleyman, evoke celebratory gatherings in exotic lands, and Doueh’s guitar playing nods more than once in the direction of his hero Jimi Hendrix.

Either of these unique acts would have been worth catching on their own. To have them together was to be spoiled with a rare chance to visit two very different worlds, if only for a short time.