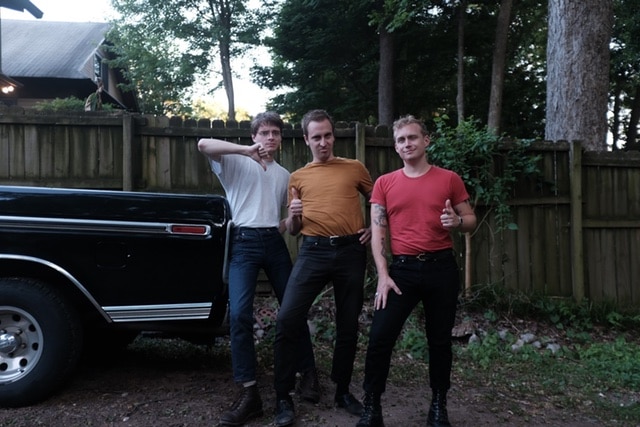 Omni are, as always, present and potent. They don’t say much between numbers to the Brighton crowd, certainly nothing of note, instead preferring to hurtle their way through their catalogue at almost breakneck speed. The one thing we are repeatedly told is that it’s been two years since they were last in town and that they have a new record, Networker, out now on Sub Pop. Front man Frankie Broyles may not be great at chitchat, but that’s forgivable, as he needs to conserve energy for his nimble guitar flourishes and sturdy but brief riffage. Songs begin and end in an almost hardcore manner, the lightning fast abruptness of their delivery being part of their charm. The audience find themselves just getting into a groove before the song is pulled from under them, to delirious but thrilled cheer.

Much has been made of Broyles’ previous life as a member of Atlanta’s rambling psych combo Deerhunter. It appears since his departure from their ranks, he has decided to remove any air of musical indecisiveness or wanton experimentation from his other endeavours. Omni are a band who dispense with the extravagant in favour of the brutally direct. Every note is perfectly placed with the occasional discordant element added for edge, every pedal expertly tuned and the drums perfectly mic’d to capture that ’70s underground rock sound. Even his vocal mannerisms are a flawless appropriation of Sparks‘ Russell Mael and Jonathan Richman. It’s a neat if somewhat cheap trick.

Over three albums and a handful of catchy singles, the band have rapidly solidified their sound. All traces of feedback are gone, the songs are tight and polished. A cursory glance at album art, t-shirt design and visual ephemera associated with the band swiftly reveals a love of circuitry and diagrams floating within negative space. It’s as if they acknowledge that they have mechanically mastered the essence of ’70s and ’80s rock and new wave. Indeed in this live setting the songs feel a little too studied, rehearsed and well, concise. The lyrics are expertly rhymed and passionately casual, as if effortless in their creation, and when they play album opener Sincerely Yours, it sounds exactly like Richman giving Tom Verlaine amphetamines and forcing him to rampage through only the best parts of the Marquee Moon LP.

Hidden in its rapid delivery is a charming lyric about romantic yearning and wanting to spend time with a loved one. Its title cribbed from the denouement of a love letter, it’s telling that Broyles is more drawn by a desire to document the finality of things rather than using his time as an opportunity to explore and unpack possibilities. Other tracks from the record such as Courtesy Call and Present Tense, along with Southbound Station from 2017’s Multi Task, thunder along faultlessly, but it all becomes a blur after a while. By distilling the essence of a sound to its purest elements, it’s possible you whittle away any semblance of emotion the listener had hoped to find encapsulated within.

What made Richman, of whom they seem so enamoured, so utterly great was the pathos and goofy humour within his lyrics and live performances. He allowed himself to look a fool and be sloppy if it conveyed the right emotion. Even on the previously mentioned Marquee Moon, you find moments where the group takes a breath or where a guitar solo suddenly begins to loop, allowing the listener a chance to catch up. Whilst they continue to be an electrifying live draw, here’s hoping Broyles lets go of the sense of nervous urgency he’s currently lumbered with and, like the narrator of Sincerely Yours, finds a chance to spend a little longer with his muses.