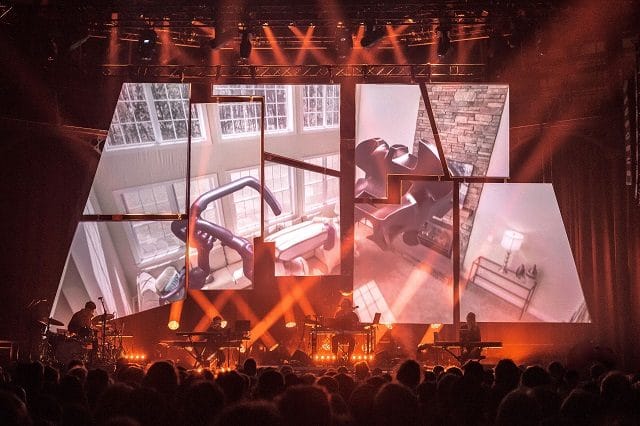 Daniel Lopatin (aka Oneohtrix Point Never) spent much of the latter half of 2018 playing live shows that re-presented music from his Age Of album in a futuristic, multimedia setting. The concerts were given the name MYRIAD and involved Lopatin playing tracks from the album backed by surrealist visuals, in-venue sculptures and a large serving of conceptual art (not to mention a very talented band featuring pianist Kelly Moran, drummer Eli Keszler and multi-instrumentalist Aaron David Ross). Tonight’s show at the Roundhouse was the last of these MYRIAD shows and proved thought-provoking and unfathomable in equal measure.

On album Age Of is a busy, hectic and deliberately overloaded work showcasing Lopatin’s relentless search for newness and originality. Live, you could argue it gets ramped up even higher. The relatively straightforward piano lines of his earlier album title track Replica unexpectedly open the show before the augmented baroque stylings of Age Of take over. It suggests the music of Johann Sebastian Bach on performance enhancing drugs (even if it is actually based on a sample of English composer Jocelyn Pook). The sensation of excess is further extended by the labyrinth passageways of Still Stuff That Doesn’t Happen, which seem to mutate inwardly courtesy of Keszler’s compressed percussion work.

RayCats sees baroque samples mix with musique concrète and esoteric electronica and is followed by the sliding, sun-bleached horizontal motifs of Toys 2. Both show how Lopatin accelerates through ideas, curtailing them just as they reach a certain momentum. The accompanying visuals veer from abstract cityscapes to nightmarish forms. There are moments when the band stop playing and strange electronic interludes take place via speakers high up towards the Roundhouse ceiling as weird alien sculptures reveal themselves and everyone in the crowd crane their necks to look up.

Babylon is more conventional, containing rare notes of emotion within the head music. Later on Same offers moments of illumination within the distortion and Moses Sumney also makes a brief appearance to sing vocals on older track Animals.

The industrial, jarring shattered glass electronics of We’ll Take It are one of the highlights of the night, as is the lush, lysergic Boards Of Canada-styled escapism of Love In The Time Of Lexapro. The Station meanwhile is clashy and punchy and Warning is built around shifting, fidgety synths. The night’s most surreal moment comes during Black Snow where five dancing girls wearing matching red outfits, cowboy hats and face masks come on stage. It adds to the sensation of unpredictability and unknowability that runs through the performance. In this context the cover of Never Ending Happening by Bill Fay with Lopatin handling vocals while Moran plays piano makes a strange sort of sense. He goes back further into his catalogue for the encore, the transcending ambient of Chrome Country being followed by Boring Angel which Lopatin describes as “a ride to infinity”.

MYRIAD is a special form of three-dimensional, co-opted, high end music. Its fragmentation and unevenness may be a little too much at times but on the whole it’s commendably ambitious and we leave the Roundhouse with a buzzing mind, eager to unpick and make sense of what we’ve just seen.