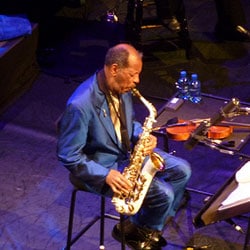 Ornette Coleman, free jazz legend, innovator and pioneer brought the house down on the last night of the South Bank Centre’s Meltdown Festival.

It was the climax of a fantastic programme of entertainment curated by the man himself and it deserved the 15-minute standing ovation and continued applause that followed.

His audience had gathered to hear a genius at work, reflecting the powerful music from Coleman’s early career and celebrating the seminal album This Is Our Music. It was his second gig here in a week, following The Shape Of Jazz To Come two nights earlier.

This Is Our Music, a masterpiece of free jazz, changed the way the world listened to the genre. Here was history being remade, for young and old alike.

Coleman ambled across the stage with his quartet in tow. Tall, aged, with tiny eyes, he took his seat and dazzled in his sharp, modern cut blue silk suit. A beat passed and without words he launched into his first number.

It was an unexpected new piece, Follow The Sound. The programme had specified that this night would be a return to This Is Our Music, first released in 1960.

A double-bass (Tony Falanga) and electric bass guitar (Al McDowell) bubbled furiously under Coleman’s flying notes. The drumming, clattering and fusing the group together, relentlessly added heat to the pieces. In a twist of form Coleman picked up violin and trumpet on occasion, giving credence to his reputation as a musician with a humourously explorative streak. It might be said that although he lacks technical prowess on the violin, his playing was nonetheless effective.

It was a delight to hear the band play around a little. Falanga was able to show off his skills when sampling Bach’s G major Cello Suite. Hearing the rest of the quartet work around this classical piece was spellbinding. Coleman picked up the violin and let rip up with tremelo and perfectly wonky chords.

Surprise guests included Flea from Red Hot Chilli Peppers on the bass guitar. Dressed in black suit and trainers he attacked the instrument, providing a funkier, fiercer edge to the proceedings. Baaba Maal accompanied Coleman all too briefly, conveying a deep sadness and lament in his performance. One longed to hear more from the Senegalese star.

We were given an aural assault by the Master Musicians Of Joujouka. The Moroccan troupe, consisting of four men on tebel drums (one of them a but of a dancer) and four men on shrill, rhaita oboes exploded with repeated rhythm and melodies, but their green silk robes were perhaps more enjoyable than their blazing disharmonies. These created an endless swirl of noise, confusing and claustrophobic. While ensconced and lost in the depth of that sound, Coleman produced themes from the older albums and orientation was restored. His music took over, and we followed again.

However, it is the consistency of these experiments that makes Coleman a master. The music, ever shifting whether from jazz-rock to Spanish influences and on around the world, keeps Coleman fresh and new. But the ultimate moment, inspiring people to find an abundance of adoration, arrived at the very end during the encore. It was something old. Coleman and Charlie Hayden took to the stage and, after 50 years working together, delivered a radiant rendition of Lonely Woman.

A man still working to break boundaries and challenge the ear, Ornette Coleman’s majesty in music will be remembered and revered for many years to come.