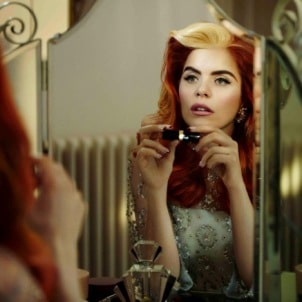 “My record label say I spend too much money; they say ‘she does the show of someone infinitely more successful than her,” scoffs Paloma Faith. And while tonight’s show is an unusually stripped down, no frills appearance from the usually flamboyant show woman, you can’t help thinking they’re right.

With Madonna playing across town in Hyde Park, the more sedate Somerset House twinkles under coloured fairy lights and a fine mist of rain. Paloma’s bagged a more intimate setting than the Queen of Pop, and that suits her down to the ground. It means she can talk…and talk she does. A natural entertainer, she chatters about everything from the rain (“I had an appointment with God but I must’ve pissed him off”) to a thinly veiled dig at her much maligned appearance as a guest-coach on The Voice (“I hate people telling me what to do…I wish we were more free… You don’t want to do that TV show? Don’t worry about it, it’s only nine million people.”) Like the music hall entertainers of yore which her retro look, glamorous hair, and east end potty-mouth emulate, she has her audience eating out of the palm of her hand as she struts about the stage between songs.

She makes quite an entrance when, dressed in an elegant floor-length ball gown and dramatic fascinator, she belts out When You’re Gone, from her new album, atop a miniature piano. It sets the tone for much of the rest of the show; every single song from Fall To Grace, released in May, gets a look in, with stand outs from her 2009 debut Do You Want The Truth Or Something Beautiful? scattered throughout. Which means the bulk of the set is sadly lacking; a potentially brilliant pop star, she’s just not armed with the songs to be next in line for the bigger gig across town.

She thrives on massive ballads like New York and her brilliant last single Picking Up The Pieces. There’s room too for a more upbeat, bratty side with songs like Stone Cold Sober and Upside Down, but Fall to Grace is full of characterless synth-driven pop that wastes a readymade pop star. And she knows it – the biggest reaction of the night was for a song that didn’t make it on to the album because her producer, Nellee Hooper, didn’t think it fitted in – “Because it’s kind of jolly and the rest is all miserable,” she tells us. And with that, she hitches up her skirt and wiggles her wobbly bits – “This is for all the people with bingo wings, beer bellies, flab…this is real life” – before launching into the anthemic Cellulite. “What good’s the burger without the bun,” she sings – it’s hilarious, tongue in cheek and exactly what she ought to be doing.

She switches between saucy, thigh-slapping chatterbox to fully blown, warbling diva with ease; dancing around with her former guitarist – tonight’s support act, Seye – who joins her onstage for Stone Cold Sober, before falling to her knees for a heart wrenching cover of Bettye LaVette‘s Let Me Down Easy. Her show’s never dull, and she may well “put on the show of someone infinitely more successful than her”, but albums like Fall To Grace won’t sustain her.