Panic! At The Disco @ Astoria, London 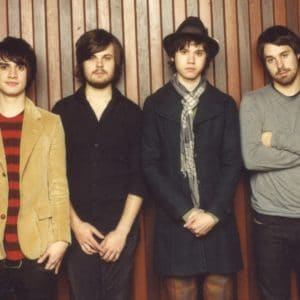 Panic! At The Disco

Ladies and Gentlemen, welcome to the American Revolution. Outside the Astoria anyone who hasn’t already been fleeced on eBay is coughing up eight times face value and the queue snakes around the block full of fans who, in the space of a few hours, will have swapped anticipation for sweat, blood and, in a few cases, tears.

Tonight, Panic! At the Disco are heroes before they have even sung a note, backed by a small army of manic devotion, who holler back every word like they are permanently engrained. If you thought that it was only the like of the Arctic Monkeys who could whip the country up into a frenzy, then you clearly underestimated the power of Emo.

Or perhaps your angst only stretched as far as openers Forgive Durden. Faced with the impossible task of opening for two bands who either have far better songs or are vastly more entertaining, their grunged-up guitars and funky riffery only just managed to poke its head around the fact that they just don’t have any killer tunes. Despite ending their set with an en-masse drum solo, they can’t provide anything more than a prelude to the real show which is about to start.

It’s without a hint of irony that New York’s Men Women and Children come out to T Rex‘s Children Of The Revolution, then promptly launch into an insane metal mash up of party tunes, killer riffs and drum samples. The guitars are funkier than Prince‘s pants and on a par with hometown peers Scissor Sisters, the chorus’ loud, catchy as hell and teeming with crowd interaction and they have a bubble machine, clap-alongs and robot voices.

It’s instantly danceable, memorable and above all one hell of a spectacle. Single Dance In My Blood has high pitched falsetto, ’70s guitar twangs and enough energy to even get those with two left feet bumping into each other, while Photosynthesis (We’re Losing O2) bounds through the Astoria like an un-caged animal. It would, on any other night, be a show stealing performance.

That is, on any night when Panic! At the Disco were somewhere else. They might be barely older than most of the crowd here tonight, with only one album’s worth of material and on their first ever headlining tour of anywhere, but they have one cuff-ripping ace up their sleeve: they don’t know what filler is.

Coming out to eerie fairground music and launching straight into The Only Difference between Martyrdom and Suicide is Press Coverage they immediately turn a mass of nodding heads into a sea of flailing limbs and teen spirit. Lurching between drum loops, synths and straight forward Jimmy Eat World style sing-song chorus, half the crowd are throwing themselves through the air, the rest turn the front of stage sweat-pit into a makeshift dance floor.

Here lies the appeal of Panic! At The Disco. By bypassing the typical Emo mould of distorted guitars and whining which clots up the genre, they sound fresher and more important than much of their peers. I Write Sins Not Tragedies shimmers with vaudeville keys, before exploding with thunderstorm drums and a chorus which could fell a redwood, while during Time to Dance, musicOMH turns around to see a group of boys and girls actually crying.