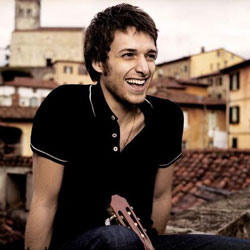 A look back at our previous consideration of Paolo Nutini’s output isn’t in and of itself likely to cause excitement at the prospect of seeing him perform.

But with debut album These Streets written off as “safe” and recent follow-up Sunny Side Up dismissed as “baffling”, maybe his live set might shed some light on why the Scottish troubadour has found a good deal of commercial success by the tender age of 22.

But the ticket-buying attendees at the Apollo are in the mood and, as the Sunny Side Up material begins with frantic ska number 10/10, so too does a carnivalesque frenzy. When he moves on to Alloway Grove, a song taken from his debut album, people all around dance and clapp along. Nutini’s fans, here in their thousands, love him and are out for a good time.

Of course, just because everybody else is enjoying something doesn’t mean it’s any good.

Nutini deserves praise for stepping outside of the “safety” of his first album and delivering a second album that surprises by going in more directions than a blind man in a maze. That sonic schizophrenia is recreated here tonight as he veers between ragtime on Pencil Full Of Lead, blues on his cover of Smokey Blue’s Caf and faux-Irish folk on Worried Man.

In so doing he covers a huge amount of musical ground, but it sometimes comes off as a series of novelty songs. Having two albums to choose from helps. His fans respond most when he’s growling his way through Loving You or rocking out to guilty pleasure Jenny Don’t Be Hasty, both from his debut; his new material may struggle to be similarly adopted as favourites.

Of course he doesn’t have to choose a particular style and stick to it. That would be boring, for him and for us. His trick instead is to give his listeners a little of everything they want. Nutini appeals to those who just want a good old-fashioned romp through accessible but mature music. These are songs that remind of what your parents used to listen to when you were a kid. And while his music isn’t anything new, if that’s what you’re after, Nutini and his band deliver.

During a short acoustic interlude he demonstrates that his is the perfect music for those who sit around campfires strumming their guitars. But he’s better than that. His voice, for one thing, is astonishing. Whether he’s playing at being Marley, Dylan or Redding he’s blessed with the raspy, powerful vocal talent of a weathered old man, something that seems incongruous with the youngster on stage.

He’s really settled into the performance side of things in the last couple of years, even if his style might not be quite what you’d expect from a 22-year old crooner. There’s precious little crowd interaction aside from the occasional “thank you for coming”, and he cuts a strange figure hunched over his microphone as he bellows out his tunes, hands in his pockets when they’re not flapping about.

It’s all a little like witnessing an above average pub band. Fun, yes, but the songs don’t make enough impact. As demonstrated by a flying bra headed his way during his final encore of Last Request, for those after a straightforward good night out, Nutini’s act is sufficient. Many will crave something more.