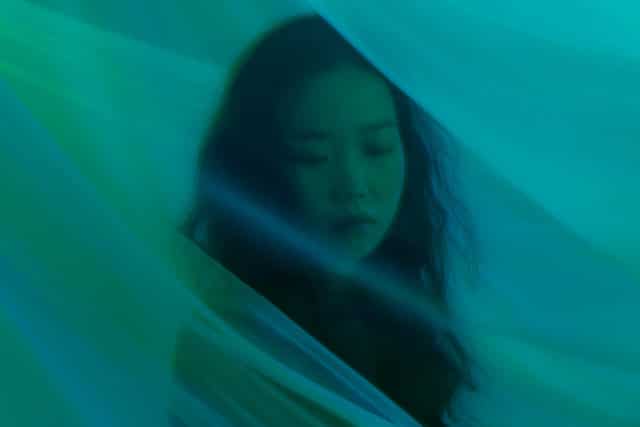 Performing on an array of traditional Korean instruments, composer and performer Park Jiha revels in the creation of mood, texture and atmosphere through acoustic sound. Sometimes she also experiments with more contemporary approaches, such as the use of found sound samples on prepared backing tracks. The result is a mesmerising, often mournful and haunting hybrid music that follows its own curious path. As Park herself states tonight: “I did not only want to play Korean traditional music, I wanted to create my own stories.”

The free, graceful elegance of her music and the range of timbres she crafts suggests she has largely succeeded in this aim and this well attended collaboration between the Korean Cultural Centre in London and promoter Serious demonstrates that audiences are happy to explore adventurous non-western musical ideas. Although the concert is presented as a recital, complete with printed programme, the compositions very much live and breathe, and there is a strong sense of being part of a specific moment.

Tonight, Park performs on three separate traditional instruments, creating an immediate and appealing variety in tone and texture. The set is bookended by two pieces performed on the piri, a reed instrument perhaps most closely resembling the oboe (but also sometimes sounding like a soprano saxophone) on which Park can create disorientating pitch bending effects. Park’s thematic preoccupations environment, the elements, nature and landscape inform her exploration of prepared sounds, although it does sometimes feel as if the intended images could be conjured exclusively from her mastery of the instruments themselves (particularly on Thunder Shower, where the recorded rain sounds perhaps labour the mood a little). The saenghwang (a series of bamboo pipes) is the most intriguing instrument in appearance, resembling a precious antique gem and sounding rich and warm.

The densest, most evocative moments of the set come with the pieces performed on the yang geum (resembling a hammered dulcimer). These pieces often assume a linear form, with Park moving from lyrical openings to a more abrasive and dissonant approach, drawing a broad range of effects from the instrument’s resonant, chiming sound. She demonstrates impressive control of tone and dynamics on this instrument (at least partially achieved through her deployment of a range of soft and hard mallets). The arrangement of pitch on the instrument is also intriguing, with the left hand carrying the melodic role and the right hand largely providing accompaniment. This is particularly noticeable on Walker: In Seoul, where Park’s right hand plucks delicate chords.

Park’s music mostly feels fluid and effortless, conveying a sense of place and memory without recourse to non-musical language. In fact, the only moment of slight awkwardness arguably came with the use of poetry. The variety of instrumentation creates a depth of timbre and texture and in addition to its specific evocations, Park’s music also has a curious dreamlike quality, making it seem as if the temporal and spiritual are briefly united.

Park Jiha’s album Philos is out now on tak:til/Glitterbeat and she returns to London to perform at LSO St Luke’s on 31 January 2020. Tour dates and further information can be found here.