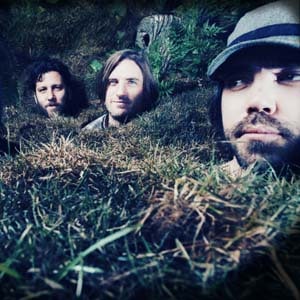 Adventures In Your Own Backyard, Patrick Watson‘s fourth album, arrived earlier this year with little in the way of announcement or fanfare but has already quietly established itself as one of 2012’s most promising releases. It immediately seems a more lucid, spacious offering than his other albums, quite something given that his second album Close To Paradise won the Polaris Prize back in 2007 (the Canadian equivalent to the UK’s Mercury Prize). It is rare that an album provides so many tantalising glimpses its influences without being derivative. Yet, Adventures In Your Own Backyard emphatically succeeds, and sees Watson impose his own personality on the music, reaching out in confident style.

Tracks from the new album were to dominate the set at this small show in the darkened environs of St Stephen’s in Shepherd’s Bush. Tonight’s gig had long been sold-out, with pews packed and a sizeable gathering stood at the back of the church. That this devoted following received each new song rapturously despite the album only being released on the day of the show indicated the regard in which he is held.

He began with album opener Lighthouse, the crystalline piano intro growing into something much more widescreen, coming close to sounding like Calexico performing an Ennio Morricone soundtrack. The performance of the title track later in the set would suggest similar.

Many of the new songs exert a greater force live than on record, especially Step Out For A While with its clattering percussion and pronounced guitars. It is true also of crackling instrumental The Things You Do, which offers subtle hints of the music of Sufjan Stevens. Indeed, it’s not an entirely wayward point of reference – the progressive outlook and breadth of arrangements found in Stevens’ later work being evident in some of Watson’s recent music.

Words In The Fire sees the band leave the stage to gather in the aisle. For many in the venue it’s the first chance to actually see Watson tonight such are the restrictive sightlines of the seating in the church. The unamplified set up for this song especially suits his voice, his controlled falsetto conveying the torch-lit simplicity of track beautifully. Moments like this also suggest he’s not so widely distanced from the likes of Ryan Adams.

He performs latest single (and arguably career-highlight) Into Giants closely surrounded by his bandmates on stage. It’s a pared down version of the original, and while a capable rendition you can’t help but feel it really deserves the multi-tiered, mini-symphonic quality it receives on the album. Strange Crooked Road is in possession of a liberated chamber-pop propulsion while Morning Sheets is the closest he comes to a traditional alternative rock sound.

He doesn’t exclusively stick to the new album however – he glides through Big Bird In A Small Cage with the help of the audience on backing vocals and plays Luscious Life (replete with mid-song vocal climax) during the encore. He finishes with alone on the piano for To Build A Home, the track he recorded with The Cinematic Orchestra back in 2007. On this showing his trajectory is (still) firmly headed in one direction only.