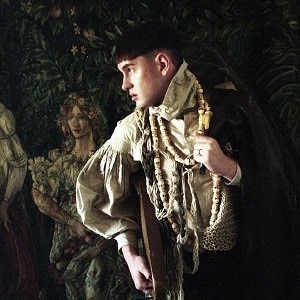 Yes, it’s one of those civilised gigs. A concert, really. The Wolf is tamed. There’ll be no spitting at security guards, throwing mic stands, or sacking backing musicians on the spot tonight. And the audience, for their part, remain seated until the final standing ovation, and tut when a camera flashes out in the gloom.

But the Wolf isn’t so wild these days anyway. Sundark and Riverlight, the album that forms the bulk of this acoustic set, marked 10 years of Patrick Wolf a solo artist, and projections on the curtain behind him of his gangly younger self, defiant and vulnerable, contrast with his new-found maturity and comfort in the spotlight. He talks too, of graduating from ukulele to the larger tenor guitar, re-works Hard Times into a pacifist protest song, and sings the “forever young” line from Tristan with a knowing chuckle.

But there’s no sense of slipping into nostalgia. Judging by the audience, he’s still picking up new fans – there are young girls, one with artist’s pad at the ready, dotted amongst the usual mix of bearded gays, scruffy ponytailed folkers, bald gays, loudly laughing lesbians, skinny young gays, middle-aged bohemian women who look like they own the houses he films his videos in, and one black guy. It takes them a while to defrost, but once Wolf leaves his piano, squatting and wailing through The Libertine, they begin to come to life and the night picks up.

Apart from the passage of time, the other overriding theme is the capital; its southern half in particular. Born a stone’s throw away in St Thomas’ Hospital, this is the closest a wanderer like Patrick Wolf gets to a homecoming. He tells tales of muggings by Oval station, running down Camberwell New Road, escaping to Battersea Park as a teenager to write Bluebells, and before Together, promises never to mention the place again – a promise he promptly breaks by launching into Bermondsey Street. Quite rightly, nobody complains.

It’s a curiously scrappy affair for a show at the end of a tour – strings and celestas break, instruments go out of tune, he forgets the chords to one song and peppers another with duff piano notes. But he keeps his good humour throughout, keeping the audience on side with Buffay-esque charm – and once the songs get going, they do start to cast their spell. Both Bitten and Teignmouth benefit from some superbly eerie saw playing, part violin and part ghost, while support act Serafina Steer adds a touch of class on the harp.

It all ends with a rousing rendition of Magic Position, complete with chorus handclaps, and a somewhat reluctant rendition of Happy Birthday, for one of the backing musicians. It never reaches the magical heights that such gigs seem to demand; perhaps the venue is a little too large and the lights a little static and low for that kind of atmosphere. But as an endearing, entertaining comma in the continuing story of Patrick Wolf, it will do just fine.