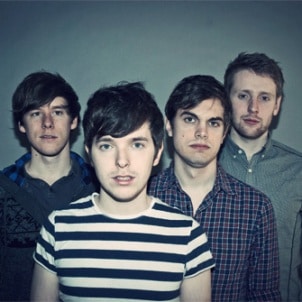 If you were to say to people that there was a genuine attempt at cultural regeneration in Wakefield then a large number of uncharitable folk would probably scoff at such a suggestion. Yet you need only look at The Hepworth gallery to get a sense of just how seriously such a notion is being taken. As a structure it remains imposing and impressive, and since it opened last May it’s acted as both a credible ambassador and focal point for these recent efforts to build on.

Part of its success has been thanks to its participation in the Wakefield Artwalk project, which sees events take place in cultural spaces throughout the city. Although the project itself has long preceded the opening of the gallery, its inclusion has acted as both as a coup for the Artwalk organisers and as an innovative way to attract new visitors to the gallery itself.

With past evenings at the Hepworth including a folk night (amongst others), this evening sees the gallery reverberating to the sounds of a varied collection of alternative acts thanks to the curative efforts of one of its senior members of staff, Dan Feeney (perhaps better known as being one half of the celebrated Pull Yourself Together fanzine/record label/promoter). Utilising the building’s auditorium and its floor-to-ceiling view of the River Calder as its backdrop, the juxtaposition between music and the fading sunlight provides a fascinating audio-visual spectacle throughout the evening.

With long shadows already being cast along the banks of the Calder, the haunting and beautific soundscapes of Her Name Is Calla offer a calming and hypnotic introduction to the evening’s festivities. Peddling music to lose yourself in, Sophie Green’s heartbreaking violin, augmented by Tom Morris’ vocals and Adam Weikert’s banjo offer a spellbinding spectacle to the lucky number who’ve turned up early.

One of the most fascinating aspects of the evening was Tom Morris’ subsequent acoustic set of singer-songwriter compositions within one of the gallery’s exhibition spaces. With the already staggering external architecture of The Hepworth being shaded by its innovative use of space and light inside and Morris’ soaring vocals reverberating around the gallery’s virgin-white walls the set made for an especially captivating experience that lingers in the mind. With inevitable logistical complexities in hosting amplified gigs in the spaces themselves, one can only wonder at what other sights and sounds could be conjured throughout the rest of the spaces.

By the time Runners take up their place on their bill in the auditorium dusk has well and truly descended, which when combined with the visual backdrop behind the group showing classic computer games (Outrun and Club Drive, fact fans) show the group at their finest. Their multi-layered electronic structures seeming at once sepia-tinged, nostalgic and futuristic; reflective and danceable.

The night closes with Patterns, and their brand of dream-pop which has already created waves in their native Manchester and at last year’s Swn festival in Cardiff. Sincerely balanced with the merest hint of melancholia, their dense arrangements suit the nocturnal sights now visible through the auditorium window, with recent single Induction and new song Slow being the highlights.

The gallery’s willingness to showcase an eclectic mix of musical artists should be lauded, with the use of light and space transforming an already impressive billing into something very special indeed. It can only be hoped that an evening of alternative music will grace future Artwalk participation from the gallery, and based on tonight’s offering it’d be foolish to miss out. We haven’t even mentioned the best bit yet. It’s free.