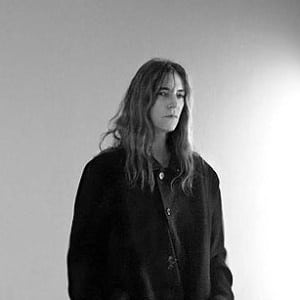 It was clear from the outset that this was to be no ordinary gig. The performance was billed as a live recording of Patti Smith reading The Coral Sea, her lengthy elegy to her former lover, the late artist Robert Mapplethorpe. Published 10 years ago, the work has been dusted off and given a new aural dimension by My Bloody Valentine‘s Kevin Shields, who provides semi-improvised soundscapes to Smith’s commanding contralto tones.

On paper, it’s an intriguing prospect. While a seemingly unlikely coupling, it’s easy to see how the ethereal quality of Kevin Shields’ guitar manipulations might compliment Smith’s strident vocal delivery. There would certainly be no treading on each others’ toes, except perhaps in the volume stakes.

Given this premise, the first half of the evening was surprisingly gig-like, complete with songs and backing musicians. With a stage set up like someone’s living room (two sofas, a standing lamp and some rugs), Smith showcased some new songs including Qana and Without Chains both featuring Spiritualized‘s Jason Pierce on guitar (Smith must have really dug shoegazing in the early 90s). Covering weighty issues such as the recent Lebanon crisis and Guantanamo Bay prisoners in these songs, Smith has lost non of her bite since the days of Piss Factory.

It was the second half of the show which was the main attraction, however. The Coral Sea sessions formed part of a series of events celebrating Mapplethorpe’s life, work and relationship with Smith, in the year that would have been his 60th birthday had he lived. A week prior to the gig, Smith hosted an evening at the Tate Modern, showing a film they made together and a documentary on Mapplethorpe’s life.

Smith continued her tribute to Mapplethorpe in a suit echoing that used on the cover of Horses, which of course, Mapplethorpe photographed. Kevin Shields shuffled on and took position on one of the sofas onstage. Anyone who’s heard My Bloody Valentine’s Isn’t Anything or Loveless will have a fairly good idea of what his accompaniment sounded like (and may even wonder how he almost bankrupted Creation records with the recording of the latter, when he manages to effortlessly reproduce the Valentines’ sound live – but that’s another matter).

Shields’ backing gives the repeated image motifs in Smith’s prose – the Southern Cross, the sea, the butterfly – a dreamlike quality which gradually turns into a stormy soliloquy culminating in a cacophony of sound, as Smith recalled Mapplethorpe’s dying moments. Smith’s performance was as mesmerising as Shields’ playing was hypnotic, and the result was an utterly captivating performance in which time seemed to stand still. It’s a touching tribute to Mapplethorpe that he can still inspire such passion from a friend, even eighteen years after his death.