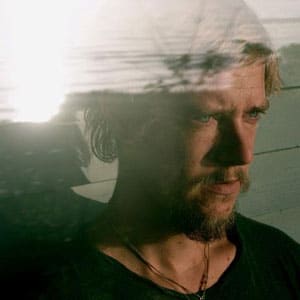 Just over a month ago, Interpol celebrated the tenth anniversary of their debut album, Turn On The Bright Lights, with a special re-release. One of the defining albums of the last decade, it was a towering celebration of intertwining guitars, New York nightlife and effortless cool. It is a collection of songs Interpol have struggled to better and, with bassist Carlos D having left the band after their last album, the band seems to have reached a turning point.

It is an appropriately reflective time, therefore, for enigmatic lead singer Paul Banks, to release his second solo album. Having shed the pseudonym Julian Plenti to sing under his own name, Banks’s recent album inhabits the same dark realm as previous albums with and without his band. At the same time, however, it often feels refreshingly new, with a palpable confidence and complexity. It sounds like a man refusing to remain in the shadow of Turn On The Bright Lights and determined to change and grow as an artist. Tonight, the UK leg of his tour reaches London’s KOKO.

Support comes from The Neighbourhood. If the hype is to be believed, The Neighbourhood are one of America’s most exciting new bands, combining hip-hop and indie into radio-friendly pop songs. Unfortunately, this is not the case. Photogenic and tattooed frontman Jesse Rutherford may look the part, but The Neighbourhood’s brand of moody pop-rock veers dangerously close to Maroon 5. A dreamy coda to single Sweater Weather is interesting and suggests some potential, but the majority of their set is forgettable.

After this brief wait, the packed venue waits in anticipation for the main event and the eventual reception Paul Banks receives is as warm as the very trendy crowd can muster. Banks starts the show with Skyscraper, with its repeated descending riff and refrain “Shake me, shake me, skyscraper” making for a menacing opening. This was followed by Fun That We Have and I’ll Sue You. Taken from each of Banks’s albums, the songs close out a powerful opening triptych, demonstrating the intention and skill of Banks and his band. Featuring a shredding champion on guitar and the bassist from The Secret Machines, they sound wonderfully relaxed and cacophonous. With Banks’s distinctive baritone rising out of a chugging, industrial sound, the overall effect is surprisingly heavy. It’s like standing at one end of a large, empty warehouse whilst the walls come crashing down at the other.

Dividing the set evenly between both albums, highlights include tensely desperate Fly As You Might and Over My Shoulder, which should be included on every indie DJ’s setlist. A keen ear for a melody has always been a feature of Banks’s work, albeit often seeming to be against his better judgement. Unusual song structures and unpredictable middle eights keep another Evil at bay, but the songs are all the more rewarding for their complexity.

One of the most surprising aspects of the gig is how relaxed Banks and his band seem. Introducing each member like a circus showman and announcing that his mother is in the audience, interaction levels are remarkably high. However, the darkness and atmospheric unease integral to Banks’s songs are ever present and his dispassionate delivery never falters. People seem to consider this style either the pinnacle of New York cool or simply alienating. When applied to lyrics about struggling relationships, the problems of getting older and urban loneliness it takes on a profoundly emotive effect. These are songs about the paranoid and desperate thoughts that go through your head at the end of the night, faces you struggle to remember and promises you know can’t be kept in the morning. And, with the knowledge that euphoria will turn to terror, Banks fixes the audience with a steely gaze and sings anyway: “Now and then I can see the truth.”

After an hour and a half of intense, industrial indie-rock, the set finishes on an unexpectedly uplifting note.  After a particularly visceral rendition of Paid For That, closer Summertime Is Coming ends with lights filling the venue and a melodic and beautiful coda. In the encore, this redemptive feel continues with a cathartic and wistful version of On The Esplanade, a song Banks wrote when a teenager. With densely interplaying guitars and Banks’s rich, deep voice, it is a moving end to a relentless set. Before leaving the stage, just for a second, Banks himself even smiles.