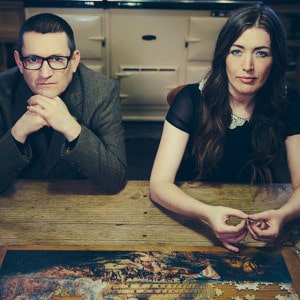 The Kings Arms sits on the Manchester/Salford border, just off the main Crescent Road. It’s rather hidden away and quite easy to miss if you’ve never been before.

Still, it’s rather well known. It has its own in-house theatre company, has featured in ITV’s Cracker and Channel 4 sitcom Fresh Meat and, since 2011, has had a rather famous licensee in Paul Heaton. Tonight sees one of the perks of owning your own pub: you can put yourself on-stage. It’s more than justified, mind.

There’s a quiet buzz of excitement this evening, as you would expect from seeing Heaton and Jacqui Abbott together again for the first time since those platinum days of The Beautiful South in the mid-’90s, with their new album What Have We Become set for release in May. Coupled with the audience being a select bunch of fans and the upstairs having something of a miniature Globe Theatre vibe about it (it’s the wooden beams), it’s all very intimate and warm.

Abbott has long hair now, making her surprisingly unrecognisable compared to the days of Perfect 10: the short, sort of cropped bob has gone. It suits her. There is a sense of nervousness between Abbott and Heaton. “You’re the first people to hear these songs because they’re not out yet,” says Heaton. Another perk of owning your own pub: you can be among selective and supportive friends.

He needn’t have worried, though. Set opener Moulding Of A Fool is textbook Heaton bittersweet, with lyrics such as “the revolution won’t be televised and neither will your death… your death will pass unnoticed like a hiccup or a cough” delivered with a cheery confidence and an upbeat, uptempo backdrop of keyboards and drums. One can’t help but wonder if there’s a political subtext to this – after all, David Cameron is banned from The Kings Arms.

But it isn’t all about the new album tonight. They want to please. Old Red Eyes Is Back, from 1992’s 0898 Beautiful South, comes next: somewhat ironic considering it’s about the death of a chronic alcoholic who had a funeral where “every single landlord in the district cried”. Of course, Heaton’s had his own battles with drink. There’s no Bitburger Drive here at The Kings, though, which Heaton mentioned as the best alcohol-free beer in an interview some years ago. Anyway, Old Red Eyes sounds tight and there’s no real sign of rustiness shown at all. Unsurprisingly, it goes down well – rightly so.

“I just need a sit down,” says Heaton, as he slips off-stage and lets Abbott sing Rotterdam (Or Anywhere) – again, no rustiness present, with confidence growing and the audience lapping it up. New song Some Dancing To Do follows, with Heaton’s vocal reaching those pleasant highs he’s known for and the music drifting from dramatic crashing drums to relative calm while lyrics ponder “who’s gonna let her down slow?”.

Don’t Marry Her (including the “fuck me” and not the less blue “have me”) and some Housemartins in Build bring us back to the past, before Heaton touches upon some good news. “Things are looking up,” he says. “Our new single [D.I.Y] is going to be on Radio 2! There’s only Radio 2 when you’re over 50.” How did he celebrate? “I put a bit of salt on my food.” D.I.Y certainly warrants its place on the coveted Radio 2 A List: short, snappy and perhaps harking back more to Housemartins territory than Beautiful South.

It’s early doors this evening and only a short set. Still, Caravan Of Love sends everyone off, as well as a theory to what the perfect love song should be: “It should make you laugh and cry but give you an erection at the same time.” Can’t say fairer than that.

Tonight was a splendid blend of nostalgia and the new. It was impossible not to enjoy it, really. It’s wonderful to have Heaton and Abbott back together again, and we should be all richer for it. That quiet buzz of excitement found in a back-street Salford pub will probably develop into something rather larger as the months go on.