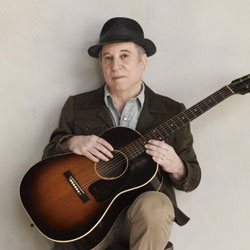 If there were any casual passers-by casually passing by, somebody should grab ’em quick. They might not believe it, but the little dude on stage is one of the biggest rock stars of all time. Well, he’s a kind of rock star anyway.

Clad in loose-fit loons and sporting a baseball cap, Paul Simon busts some very personal moves to You Can Call Me Al and Graceland. He even tells us London feels like his hometown…

Its been a long time since Bob Dylan producer Tom Wilson added drum ‘n’ stuff to some ameliorated bedsit folk Columbia had sitting unloved in the vaults.

Once the remixed versh of The Sound Of Silence hit number 1, Paul Simon had left his tour of England’s backwaters. And before you could mumble ‘homeward bound’, Simon and the bouffant Art Garfunkel were gold-standard recording artistes.

There’s much more to the story of course. And one of the secrets to Simon’s longevity is both visible and audible here tonight, embedded in the international make-up of personnel and sound used to embellish the modern concerns of a 1960’s-minted NY liberal.

Notable amongst these is Vincent Nguini, he of ringing arpeggios and subatomic, basso profundo voice; Bakithi Kumalo of the electric bass; and the less exotic, but no less ubiquitous Mark Stewart. It is Stewart who amongst other things, plays the didgeridoo in a way that makes you forget Rolf Harris turned it into the didgeridon’t.

The suburban register of Mr Simon’s own tones do not appear to have shifted a notch since he and Art were calling themselves Tom and Jerry. Through a swiftly worked through 25-song set, Simon stays in métier through a globetrotting array of styles without breaking out of that ever-agile but under-forceful harmonising whine.

Though there is the new album to flog, the real surprise is the respect, credence and care given to the back catalogue, even giving Bridge Over Troubled Water an artful (yet also Art-less) rehang. Once the Arena’s hired muscle let the ticket-holders enjoy themselves, the appreciation was for all to see.

New songs Outrageous, Father And Daughter and an assertive Wartime Prayers bear favourable comparison with much of the earlier volumes of the Paul Simon songbook. But As Simon himself attests, they have the memoire-like configuration of a man in his ’60’s.

So no matter how superannuated the population becomes, the new songs will find it hard to worm their way into the hearts and bones the way the likes of Cecilia, 50 Ways To Leave Your Lover and Mrs Robinson once did (all performed here with none-too displeasing rearrangements).

That said, I’d take any of the new songs over the mid-career despondency of Still Crazy After All These Years, performed almost apologetically by Simon as if he were singing the words of another man. Worse, as if that other man were Billy Joel.

Whether the lucky dip pulled out something from the S&G times, the sensitive singer-songwriter decade, or the reborn years when Simon became something of an itinerant emancipator of vernacular rhythms, Simon’s particular gift for euphony remains absolute.

Perhaps more than any songwriter of the last 40 years, no-one has Simon’s talent for cramming as much wordage into a bar as it could hold without losing tempo, while retaining a high level of sweetness no matter how glum the introspection or verbose the line. You may argue, but the eight billion who’ve bought his records would agree (admittedly, the real figure may be a little less).

There is also the reoccurring notion of how many of Simon’s lines have permeated everyday life (“you know the nearer your destination…”). Yet for all his gifts, Simon’s habit of staying permanently on the side of prettiness oft fails to examine the human condition in that subcutaneous way that less-traditionally gifted artists often can. Spry as he remains, it’s doubtful if Simon has ever really been crazy, but we all know what he means.