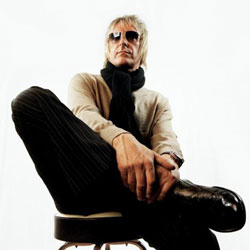 2008 has seen him release no less than three albums: Live At The Royal Albert Hall, Weller At The BBC, plus a richly diverse new album 22 Dreams, his biggest-selling solo effort after Stanley Road.

No wonder on the second of three sold-out nights at Brixton Academy he seems so chipper.

Having just turned 50, the long-streaky-grey-haired Weller looks sprightly yet relaxed. The old curmudgeon appears to have mellowed in the last few years, enjoying his status as Britpop Modfather to not-so-young and younger pretenders such as Noel Gallagher, Graham Coxon and Carl Barat. He even attempts some rather awkward chat with the crowd but he is more at ease communicating through his music. And he still performs with the same commitment that he showed with The Jam 30 years ago, as he and his excellent band put on a stunning two-hour set for an adoring audience of all ages.

Surprisingly Weller only plays seven songs of the 21 on his recent album: this gig is more of a retrospective of his solo career rather than plugging his new material. It’s Weller at his rockiest, but this is also his most psychedelic live show, with brightly coloured images beaming from a large screen and plenty of distortion and feedback in the guitar sound from long-time collaborator Steve (Ocean Colour Scene) Cradock. What is most impressive though is the way old familiar songs are often presented in new ways, so it feels like we are hearing them for the first time.

Weller kicks off with a strutting account of Peacock Suit from Heavy Soul, followed by a passionate performance of Out Of The Sinking (the first of six songs from his classic album Stanley Road), then the title track from 22 Dreams. It’s interesting that the new songs he plays tend to be the rockier ones, and even the more melodic, romantic ones such as All I Wanna Do Is Be With You and Have You Made Up Your Mind? have more punch live than recorded. He may be well advanced into middle age but Weller still has an aggressive stage presence.

As Is Now’s From the Floorboards Up continues in up-tempo mode but then the mood softens with The Style Council‘s soulful Shout To The Top, only to harden again with the bristling punkiness of old Jam favourite Eton Rifles, which gets the crowd singing along. Porcelain Gods is given a spaced out feel, while Wishing On A Star features Cradock on the hauntingly beautiful lap steel guitar and Invisible has Weller playing piano in dreamy, romantic mood. The driving momentum of Push It Along, the psychedelic otherworldliness of Echoes Round The Sun and a strange dub version of Wild Wood are offset by a folksy performance of Brand New Start, with four of the band on acoustic guitar, and the hand-clapping-inducing Broken Stones.

The first encore surprises, even shocks: the apocalyptic vision of old song Whirlpool’s End is accompanied by a new video sequence about 9/11 and the bombing of Baghdad, linked to the assassinations of JFK, Martin Luther King, Robert Kennedy and John Lennon – a potent message to give peace a chance. But the show ends in a more upbeat mood – traditionally for Weller – with A Town Called Malice, whose bitter lyrics are belied by its joyous soulful tune, so that the crowd head out into the freezing night with warm hearts.