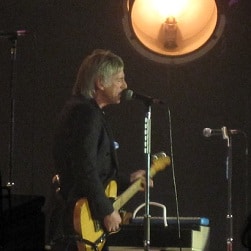 One of the pitfalls of being such an established performer as Paul Weller is that your fans, no matter how understanding, yearn for the highest peaks of your 35-year output. With that in mind, kicking off this fourth of five nights in residency at the Roundhouse with the whole of his newest album Sonik Kicks, played from start to finish, was a brave move indeed.

Nor did it smack of commercialism, for it was immediately apparent that Weller was fired up – and even a bit nervous – for this first part of the show. Clearly the album makes technical demands on all concerned, with its dashing about between styles, its sudden mood changes from agitated to blissful and back again, and its curiously coloured interludes, managed with grace by the Wired Strings, positioned back right of the stage.

Weller’s wife Hannah appeared for the tender, reggae-brushed duet Study In Blue, which was loving but with a frisson of awkwardness, the two effectively expressing their deep and private love for each other at a table for two, with a couple of thousand eavesdroppers hanging on their every word. Of greater impact was the fine single This Dangerous Age, a kind of cross between Stealers Wheel and Blur. The Attic managed an effective blend of ferocity and soft centred, soulful rock, while Around The Lake was technically impressive, driving along on the back of heroics from its two percussionists, the rumble of their bass drums a feature beneath the whole album.

Chin jutted out, Weller stubbornly steered clear of his most popular hits, returning after a short interval for an acoustic set that included successful reworkings of two Wake Up The Nation standouts, Aim High and No Tears To Cry, after a soft centred and rather beautiful version of The Jam‘s English Rose. This segued in to the electric finale, whereupon the diehards and occasional Weller identikits on the fringes of the crowd, some of whom managed to talk all the way through their hero’s new album, put their phones away, stopped talking and concentrated on the music.

Stanley Road was dedicated to Noel Gallagher, while Fast Car/Slow Traffic zigzagged its way through the back markers with a quick step beat. Whirlpool’s End, drawn out to impressive guitar-laden heights, provided a powerful closer, before a pregnant pause and the ultimate reward in Town Called Malice.

Avoiding many of the highs of the back catalogue, an intention Weller declared when interviewing for this album, is laudable, a statement that reeks of confidence in the songs from the most recent three long players. That Weller nearly pulled it off here says much about where he is at the moment, still finding new ways to express himself – and showing no sign of taking his foot off the pedal, figuratively speaking or otherwise.

Paul Weller played:Sonik Kicks (Green, The Attic, Kling I Klang, Sleep Of The Serene, By The Waters, That Dangerous Age, Study In Blue, Dragonfly, When Your Garden’s Overgrown, Around The Lake, Twilight, Drifters, Paperchase, Be Happy Children)

Acoustic: English Rose, Out of the Sinking, Aim High, No Tears To Cry, All I Wanna Do, Devotion, Black River; Electric: Moonshine, From The Floorboards Up, 22 Dreams, Stanley Road, Foot Of The Mountain, Wake Up The Nation, Fast Car, Echoes Round The Sun, Whirlpool’s End. Encore: Town Called Malice