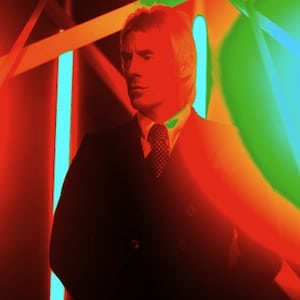 It has not been a good week for the rockers. And this gig granted the opportunity for the perfect ending, had Bradley Wiggins scootered on to join Paul Weller in a duet of 5:15, but sadly ’twas but a dream.

Despite a full, if slightly stylistically inconsistent bill, the proliferation of feather cuts and Fred Perry shirts should have given you a big clue about who was the main draw. This was Weller’s night. As a result all support suffered, some worse than others.

2:54 probably least of all. They were sultry and dangerous, toying with the audience with the lazy malevolence of a bored cat and a fast tiring mouse. A spectacularly taut Sugar and an throbbing Circuitry were ample reward for those there early.

Japandroids were next, and in a hurry. As they kept telling us, and which seemed to be the source of some consternation for the Canadian duo, they only had half an hour for their set. After the languid opening of 2:54, this was quite a jolt, charting a course somewhere between We Are Scientists‘ deceptively jovial pop-punk and Death From Above 1979‘s sonic barrage (with a bit less bottom end). Nothing if not energetic.

The ones affected most by the tribal leanings of the crowd were Spiritualized. Their set was watched with a general air of disinterest, a loud murmur of chat audible whenever Jason Pierce and his men quietened down.

Which they didn’t do frequently. This was as antagonistic (and as loud) a Spiritualized performance as there’s been for a while. Songs descended into squalling buckets of feedback and aggressively atonal noise. It was occasionally enthralling – particularly a ferocious Mary, the veins bulging in Pierce’s neck as he screamed the chorus – but you need a more hushed, reverential tone to get the most out of Spiritualized, and this wasn’t either of those things. Not when WELL-AH was ah-waiting.

Hailed like a returning hero from the moment he bounded on stage, the terrace chants rang loud, the beer was tossed, and lots of sweaty, manly hugging broke out. Weller played like he had very little to prove. Not complacent, just relaxed. Understandable when you consider how his last three albums have demonstrated a rejuvenated musical ingenuity, and one of the more starting things here was just how modern and vital it all sounded.

The best bits were the songs from the last record. A swooning The Attic, the pastoral psychedelia of When Your Garden’s Overgrown and a frenetic Kling I Klang – all from Sonik Kicks – were brilliant. They made the dad-rock britpop posturing of Broken Stones and The Changing Man sound very dated.

It isn’t often the new trumps the old, particularly with someone who’s been around as long as Weller. Plus, let’s face it, he could spend the rest of his days playing Jam covers and dad-rock, britpop posturing to throngs of doting patrons with a finely tuned sense of nostalgia.

But he isn’t and the fact he isn’t should be heralded. This was a performance from a man with surprises left to spring. Somewhere in a Brighton suburb, Ray Winstone is bawling into his leather jacket.