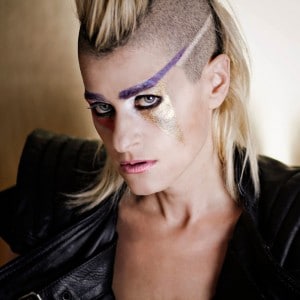 Canada’s favourite Berlin-dwelling potty-mouth electric-weirdo seems determined to be everything except what we expect from her. Across the week-long Meltdown festival this year she’s Peaches the DJ, Peaches the activist, and Peaches the conceptual performance-artist, all at the personal invitation of curator Yoko Ono. Tonight we get Peaches the musical-theatre brat, with the woman known to her family as Merrill Beth Nisker performing all of the songs from the Lloyd-Webber/Rice classic rock opera Jesus Christ Superstar, in order, accompanied only by piano.

This isn’t some sort of ironic hipster exercise either; Nisker clearly really, really loves Jesus Christ Superstar. The whole thing is done completely straight, with no tongues in cheeks, no nods and winks – just a woman on a stage, starry eyed and arms aloft, with (make no mistake about it) a belting singing voice that may take some people by surprise. It’s an ambitious idea – the current production of Jesus Christ Superstar has a massive cast, huge sets, a reality TV-elected lead, Chris Moyles and a Spice Girl. Peaches has a pianist and some spandex.

Taking the stage for Act 1 in ballet shoes and a nude leotard with a weird, alien-looking collar, Nisker is all business in furious character as Judas on the opening Heaven On Their Minds. It’s a strong start to an evening that’s impressive but uneven. The solo pieces, as Mary Magdalene on I Don’t Know How To Love Him, as Christ himself on Gethsemane (I Only Want To Say) and any time she’s playing Judas are electrifying. Nisker is a much more gutsy singer than many perhaps will have realised, and she channels the various characters with some panache. Alas, the group pieces are less successful and harder to follow, especially for those unfamiliar with the source material, and the first half especially has a staggered momentum and an audience that never quite settles as a result.

Things notably pick up in Act 2, however; by now the room has adjusted to the tone and tonight’s star is clearly having a ball. As the show progresses things get more theatrical and more fun. Herod’s Song is a proper treat, with Nisker now head-to-toe in gold, including leggings and an over-sized bomber jacket. She makes a deliciously hammy, moonwalking meal of the pantomime villain, while Trial Before Pilate actually manages menacing, the stage now covered in dry ice and lit from below as whip-cracks sound across the room to yells of “Crucify him!” from plants in the crowd. It’s deftly done, and one of the few parts of the show where an ensemble piece is actually improved for the make-under.

When Yoko Ono’s Meltdown was announced, tonight’s show was billed merely as “Peaches”, with the “Christ Superstar” only added a few days ago, raising the rather delicious prospect that there a number of people in this hall who bought their tickets expecting to see the likes of Fuck The Pain Away and Boys Wanna Be Her in all of their stompy might. Oh, to see this show through their eyes. But then, as Nisker stands atop a plinth, wrapped in gold foil, arms aloft in crucifixion, a gold band signifying a crown of thorns on her head, and sings the show stopper Superstar Superstar, and as fans emerge from the crowd to mount the stage and dance around their messiah, you realise those early ticket-buyers got what they wanted after all – they’ve been watching a Peaches show all along.