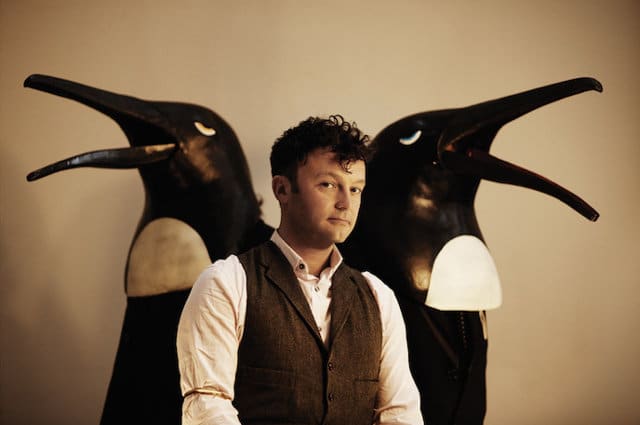 The early stages of her set are dominated by tracks from last year’s The Miraculous album. Discovery is a dramatic if, by her standards, relatively conventional curtain raiser, but from then on she slides ever further into gloomy, subterranean chambers. Black gothic chasms seem to open up in front of us and it begins to feel like we are in the middle of a tightening musical vice as she mercilessly ramps up the intensity. There are moments when she briefly recalls PJ Harvey if she had been stripped of all her recent conceptualism and pushed to the outer extremities. She uses the choir inventively, and her band help deliver repeated reprimanding blasts, all draped in an icy, draconian aesthetic. It’s all too much for some who dash for the exits. For their sake it may be for the best, as she concludes by summoning powerful forces from the base of her blackened soul for a series of rapidly imploding, metallic finales.

Penguin Cafe are an altogether airier and lighter proposition. Just like the music of his father Simon Jeffes with Penguin Cafe Orchestra, Arthur Jeffes’ ensemble take the familiar and twist it into unusual, malleable shapes. Taken together, theirs is an endlessly fascinating musical world, even if live shows only allow for a limited, carefully chosen representation. They continue to be a band of juxtapositions – between the rough and smooth, the melodic and obtuse and the melancholy and extroverted.

They begin with two old favourites. Air A Danser canters along gleefully, unravelling without a care in the world before Telephone And Rubber Band partly outgrows its novelty roots, sounding fuller and more amplified as it shuffles along (with Jeffes playing the ringtone from his iPhone for added “thematic coherence”). The horticultural scratchiness of Bean Fields and off-centre acceleration of Swing The Cat contrast with the unbroken and richly melodic Music For A Found Harmonium and Perpetuum Mobile, still two glorious odes to the power of musical repetition.

More recent tracks from the two Penguin Cafe albums stand equally tall. Landau still suggests what a concerto for melodica by Steve Reich might sound like and, for a band that trades so openly in emotions, Solaris provides some of the hardest hitting. It is also one of many tracks that show how the tabla has been recently absorbed into the Penguin Cage family of instruments. Later, the mannered minimalism of Catania is outweighed by the Latin kick of Black Hibiscus, still their most red-blooded moment. Frahm discreetly joins them at the side of the stage for a few tracks, too.

The four new songs debuted tonight sound promising, very Penguin Cafe-like in the way they develop and grow, all minor scale fluctuations and refined playfulness. The encore sees the traditional pairing of Harry Piers, still a breathtakingly poignant and magical journey across the piano, and the expanded and rejigged Salty Bean Fumble, which still makes music journalists consider using the word jaunty without fear of repercussion. They help prove that the Penguin Cafe is still a prospering, thriving and delighting concern and is very much open for business.