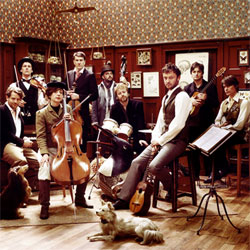 When Arthur Jeffes announced he was to continue playing the music of his father Simon’s seminal band Penguin Cafe Orchestra, as well as composing new music under the Penguin Cafe name, there was a slight worry that it may have resulted in a diluted version of the latter’s unique and uncategorisable sound. However, the release of the album A Matter Of Life earlier this year and shows like tonight’s in the beautiful surroundings of Hackney Empire have emphatically dispelled these kind of concerns.

Jeffes has assembled a gifted, young band possessing the high levels of musicianship required to play the near-avant-garde music of his father. Tonight he fronts a ten-piece ensemble (that includes Suede man Neil Codling) and they display the intricacy, finesse and understanding you would usually associate with a chamber orchestra. They open in cautious style with two older tracks, Dirt and From The Colonies, both ever so slightly tropically imbued, with mandolins and ukuleles to the fore. The raucous, accelerating violins of Swing The Cat signals a brief change in pace before we get to hear the first of the four new tracks aired tonight.

It is these new tracks that come across as the most affecting pieces tonight. It is hard not to be struck by how each seems to have been individually descended from older Penguin Cafe Orchestra tracks (an observation the album further confirms). It is this what is so particularly moving about them, a familial, congenital quality running through each. An additional testament to them is how they seamlessly sit alongside the older material, retaining the curious ability to pull at the heartstrings. That, Not That is full of Steve Reich-esque piano sequences, as is following track Landau. On the latter the Northumbrian pipes of the album version are tonight successfully replicated on melodica, over more lines of pleasingly uneven piano.

The remainder of the set sees them concentrate on older material. Prelude & Yodel is sensitively reproduced as is Air A Danser, bobbing melodies skipping along and periodically tripping over themselves before regaining composure and continuing their musical journey. The use of Penguin Cafe Orchestra music in the soundtracking of films and television programmes has not dulled the vibrancy of pieces like Music For A Found Harmonium and Perpetuum Mobile. Tonight the former sounds like an Irish folk tune that has been inhabited by Philip Glass, and the latter’s encircling strings and piano motifs sound as beguiling as ever. Similarly, Telephone & Rubberband, quite ahead of its time in its employment of found-sounds and samples, sounds just as eccentric a little miniature as it did 30 years ago. Meanwhile the brittle acoustic strands of Paul’s Dance practically dance off the stage and the oblique, slowly rising strings of From A Blue Temple exhibit a darker, more ominous side to the ensemble.

They return to play an encore of two tracks, one new and one old that show just two of the sides to their multi-faceted sound. Jeffes takes to the stage alone to play Harry Piers, a piece of glittering, cascading solo piano that reaches several little apexes along the course of the four minutes, also recalling the quiet intensity of recent Nils Frahm releases. Salty Bean Fumble closes the show on a swaying, quirky note. Effectively, it is a microcosm of the evening, part profound beauty and part carefree fun and shows that with Penguin Cafe Arthur Jeffes is very much keeping the original spirit and character of his father’s outfit alive.