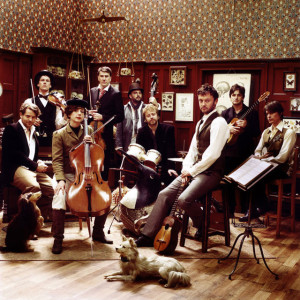 The Union Chapel has been a regular feature in the history of the Penguin Cafe Orchestra. It was the setting for several shows by Simon Jeffes’ original ensemble in the 1990s and it hosted concerts by remaining members of the PCO in 2007 to commemorate the 10th anniversary of Jeffes’ death.

It was appropriate therefore that Penguin Cafe (the project led by Jeffes’ son Arthur) chose to mark the release of their second album with a trio of shows at the Islington venue. The demographic of the audience on this second night suggested a high percentage were present for these earlier shows, but judging by the rapturous reception the show received, the new ensemble are already being held in similarly high regard.

They may have taken to the stage to the sound of PCO classic Telephone And Rubber Band but it was tracks from new album The Red Book that dominated the set. The choice of opener also unintentionally cast significance on the new material, for the idiosyncrasies and eccentricities of such PCO tracks seem to have been left behind to a degree. The influences and connections to PCO are still undoubtedly identifiable, but The Red Book is the sound of Jeffes breaking free, channelling more of his own personality and interests into the sound. During the early part of the set it is evident in the combined musical shuffle of Catania, the rustic mandolin and ukuleles of the Cuban-inspired Radio Bemba and in the juxtaposition of draped strings over the nimble, elastic arrangements of Bluejay.

There are also three new tracks themed around space and astronomy. Aurora has a restrained power and majesty, quietly and cinematically evoking the sound of the galaxies (appropriate given it was recorded at Skywalker Ranch, the studio of filmmaker George Lucas). Solaris possesses a similar finesse, while the granular minimalism of 1420 is based around the Wow! signal (a radio signal detected by scientists in the 1970s, suspected being of non-terrestrial origin). Jeffes disappears behind the pulpit to play the Union Chapel’s organ on the latter. A refusal to stick to one style was always a feature on PCO albums and the way Black Hibiscus is transformed from Chopin-inspired classical elegy towards ardent Latin colour shows it to be alive and well.

In terms of older material played there are no major surprises. Air à Danser skips along with a joyous weightlessness, tonight beginning with an extended classical guitar intro from Neil Codling. The mild, string-based frenzy of Swing The Cat retains its place in the set (with Jeffes light-heartedly commenting how the violins are “always just shy of being too fast”) as does the bluegrass-tinted, celebratory dash of Bean Fields.

Perpetuum Mobile remains four minutes of shimmering musical perfection meanwhile, and the patient unfurling of Nothing Really Blue shows how Jeffes is still keen to dip into lesser explored parts of his father’s catalogue. Penguin Cafe’s 2011 debut album A Matter Of Life is represented by the beautifully coalescing textures of Landau and the dazzling emotional peak of Harry Piers, played during the encore by Jeffes, alone on stage.

With tours of Japan and Australia imminent, further UK shows including a greater visual aspect being considered for 2015 and seeds of new material already being sown, it is an exciting time for Penguin Cafe, full of creative possibilities. Throw in such positive, accomplished shows like this and it’s clear that the sky’s the limit.