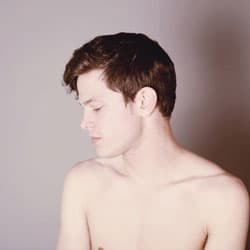 Tortured; fractured; damaged: the type of words that turn up time and again in articles about Mike Hadreas, the man behind Perfume Genius. They’re inevitable because the songs he provided on his debut album Learning were 10 open wounds, written by a young, sensitive man using music as a way to confront and convey the struggles he’s had to deal with in his time growing up in Seattle and in New York.

What Hadreas in fact portrays tonight in Camden folk venue Cecil Sharp House is not a man tormented and broken, but someone shy and introspective, and not entirely at ease with the place he’s found himself in. Because for someone who had never been out of America before this summer, he’s here on the second date of a European tour, with glowing reviews of his album across the board and a growing reputation as someone very special. It must be a strange and unexpected position, especially when the music is so gut-wrenchingly personal, to feel a responsibility to expose your frailties in a live arena and make sure that this audience of strangers make the same connection with your music in person as they’ve made with it on record.

While Hadreas is nervous and awkward, he also turns out to be charming and smiley. His whispers of gratitude to his audience don’t exactly disappoint, but do have the effect of taking away some of that intensity. Of course it would be ridiculous to expect Hadreas to come on stage and sing his songs of addiction and suicide in the character of the person he was when he wrote these pieces, but it ends up being a different experience to the simple playing of the album. Whether his demons have been exorcised is impossible to say, but there isn’t the sense of watching him exorcise them in front of our eyes.

Musically the songs from Learning are recreated well, his voice brittle as he begins with the lilting arpeggios of Lookout, Lookout and You Won’t B Here. Situated primarily from behind a keyboard, he shifts to a piano for Deep Space and plucks and twangs a guitar unevenly and irregularly on Normal Song. He’s accompanied by Alan Wyffels who for the most part sits back from Hadreas, but joins him at the keyboard and harmonises vocally side-by-side for a couple of songs including Learning’s title track. Concerns that there simply wouldn’t be enough material to headline a gig (the album clocks in at under 30 minutes) are misplaced as the set finds itself bolstered to a decent length with a few non-album tracks taking the setlist to 14 songs.

Hadreas is a talent unearthed seemingly from nowhere. He’s made a mark by putting together a very affecting album, but its magic exists in its brutal emotion. It may prove difficult for him to reach into himself and reproduce that every time he performs.