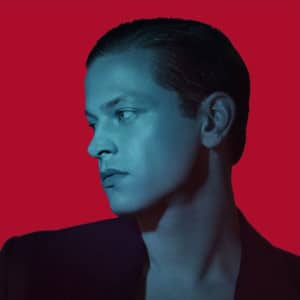 Last year, Seattle-based Mike Hadreas, aka Perfume Genius, performed an unexpected ascension out of the swamp of charming, introspective emotional balladers with his third album, Too Bright. This sexy, dark, prowling beast demonstrated a surprising willingness to invert the introvert, led by its opening single Queen with the instant-classic clarion taunt “No family is safe when I sashay”. A headlining show at the Royal Festival Hall represents a significant step-up, of which both audience and performer seem keenly aware of tonight.

The relative vastness of the stage strangely works to the band’s favour. Beyond the fabric-draped instrument stations, there is only a solar lamp and low-flying glitter ball to clutter the set. The low lighting, plush colours and drifting smoke conjure a primordial cabaret, a Theatre Jurassique if you will, through which Hadreas tentatively twists and stalks, like a baby velociraptor exploring its new environment.

As the show gets going, these baby steps evolve into the terrifying adulthood of the material from last year’s album Too Bright. Time spent experimenting with the vocal ferocity of Diamanda Galas and Hadreas’ beloved PJ Harvey has clearly paid off in gory buckets: the screams and yelps of My Body are matched with blood red lighting on stage to visceral effect. However, the fact that Too Bright represented such a leap into the unknown causes some tension in performance between the two phases of his career. The constant shifting of gears isn’t necessarily a problem, but does make this show at times feel like a transitional one, where the new and old eye each other somewhat suspiciously.

Hadreas stays seated for the short piano ballads that characterized his first two albums, but is then up and about exploring a burgeoning frontman persona that is the biggest surprise of the night. The charisma that he exudes when freed from behind his instrument is of a totally different kind to that of the diffident, yet charming, singer-songwriter behind his silk-curtained piano. Short, emotionally pithy ballads are, of course, what built his initial fan base and are as well received tonight as the Too Bright material. As each ballad finishes (he has a tendency to look awkwardly down to the floor upon ending) the realization sets in that, charming as this routine might be, it was probably never going to take him much further than he’d got already.

However, the boy now has a whole set of serious moves going on: a bandy-legged knee jive that draws attention to his shapely calves and patent Cuban heels, and a chicken strut far more sensual than anything Mick Jagger could muster. At one point he even fixes himself to the front of the stage and stares out the audience, looking for all the world like he might actually be enjoying the process. Sadly, though, the one disappointment is Hood, the single from his last album with the memorable video that shot his profile over the parapet back in 2012. The band demonstrate that they can pack a sharp, reptilian groove, but can’t seem to get to grips with building the dynamics of a rock ‘n’ roll ballad, sadly dissipating the song’s emotional punch. Nonetheless, this album’s highlight Queen, which caused many an aural double-take on its debut, marauds the set to a close like a full-grown T Rex that has cannibalized its young.

Overall, there was a sense that Hadreas was in the process of becoming, right before our eyes. This contributed to the thrilling feeling that we may have witnessed a pivotal moment in his career tonight, and certainly a pivotal performance. It seems unlikely, though, that he has managed to process the impact of these changes yet: the band walked off stage after a three song encore, culminating in a powerful All Along, not noticing that they had caused a heartfelt standing ovation.