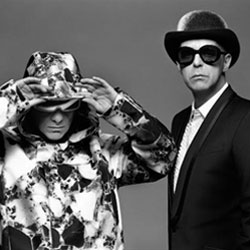 The Pandemonium tour finally came to its conclusion 18 tireless months after it began in Russia, having stopped at Latitude Festival last year, Glastonbury and Primavera Festivals this year and arenas all over the world.

Tonight’s final outing was the second Big Noise Session in aid of Mencap following on from Coldplay‘s inaugural Exeter event last year. However, rather than do something different, it’s pretty much the same magical Pandemonium show as all of those others. The main difference was the venue, which while still medium-sized, felt intimate in comparison to the huge stages the show was created for.

Neil Tennant and Chris Lowe’s familiar pop songs, some of the best and most immediate of the last 25 years, don’t need much commentary. We all know how good the likes of Heart, What Have I Done To Deserve This and It’s A Sin are. But what the boys have done on this tour to bring them to life has been spectacular.

With so many bands right now being comprised of someone on synths and someone singing, the innovation that’s gone into the staging of this tour has been inspirational. Between the set design, the superb, surreal styling and the choreography, the evening demonstrates what can be done with a bit of courage and a lot of imagination.

Neil and Chris have never been the most physical of performers, but around the time of 1993’s Very, they embraced their “showy” side by utilising more ambitious staging methods and in particular weird oddities of outfits. And so the Pandemonium tour has been defined by the four dancers and muses who ensure our visual focus is trained away from the music-makers and onto them instead. Covered up with all manner of ridiculous disguises, masks and hats they’re subject to a slow reveal that means we don’t get to see all of their faces until the gig is over an hour in. Employing a loose narrative their roles build slowly over a series of classics including Go West and Always On My Mind. At the crucial hour point, ballads The Way It Used To Be and Jealousy find the relationship between two of the dancers break down. Bringing in some superb ballet choreography to effectively portray the resulting violence this sequence becomes the devastating heart of the show.

With this being the end of Pandemonium, if you missed the tour you’ll have to rely on the DVD to find out just how good it was. And while tonight’s gig doesn’t reach the heights that they’ve reached in other venues (in particular outdoor ones), it’s unavoidably brilliant fun. An added second encore of It Doesn’t Often Snow At Christmas complete with four dancing Christmas trees is a nice December touch.

Spell-binding to watch, this tour has set new standards. There should be a lot of other bands taking notes on how to inexpensively create something this spectacular and memorable. Not just thinking outside of the boxes, but also using them as projection screens, podiums and weapons, this tour has been more Phenomenon than Pandemonium. It’s sad to say goodbye, but there’s little doubt that they’ll be back with something even more ferociously outlandish next time.