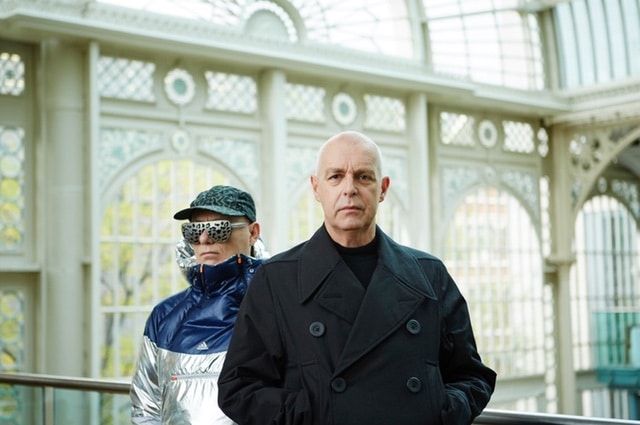 In the inner sanctum of high art, high art pop. The notion that bands have ‘purple patches’ or ‘imperial phases’ doesn’t really apply to a pop duo with 42 chart singles to their name across a 30-year career that also includes film soundtracks, a ballet, a west end musical, and a late night prom dedicated to Alan Turing. Pet Shop Boys make a good argument against the idea of dipping and ascending in the form stakes, and of being pigeonholed as merely an electropop duo; the secret to their longevity could be that they try things which others might not. As they begin a four-night residency at the Royal Opera House, Neil Tennant and Chris Lowe could never be accused of being boring.

The venue’s opulent surroundings and crammed-to-the-rafters crowd tonight bear witness to the first of those four nights. The show is named Inner Sanctum, after a track from this year’s album Super, and is set out in four acts. All of these feature a dizzying spectacle of lighting and lasers, eyecatchingly costumed dancers, memorable visuals from the mind of creative director Es Devlin, and euphoric cast-iron pop bangers which defy any suggestion of the successful continuance of bechaired opera audience etiquette. From the off, the orchestra pit writhes in a full-on rave; the tiers of seats behind and above can only contain their occupants for so long.

The show’s title track begins with two spherical baubles appearing centre stage, eventually turning to reveal Tennant and Lowe. Both sport elaborate headgear; the latter’s obscures his face, the former reveals. Their continuous dynamic, unchanging since the ‘80s, is present and correct; here is Tennant, the surefooted, ascerbic showman, and here is Lowe, the motionless machine.

Billed as the launch for Super, the second of a mooted trilogy of albums produced by Stuart Price, the man responsible a decade ago for Madonna’s Confessions On A Dancefloor and the Pet Shop Boys’ 2013 album Electric, it soon becomes clear that fan favourites too will have their place in the setlist. The plaintive and instantly recognisable synth strings of their first single, West End Girls, strike up early on, causing a collective whoop; its contemporary, In The Night – the b-side of Opportunity (Let’s Make Lots Of Money) – shows up shortly after. Between them lies recent single The Pop Kids, a song defining Tennant and Lowe’s raison d’être down the years, an ode to the defining, life changing power of pop music.

The opera house surroundings add an exquisite layer of irony to Love Is A Bourgeois Construct, Electric’s none-more-English track referencing tea and Tony Benn. At one point Tennant’s head looms large, like the Wizard Of Oz, across the backdrop, his expression variously singing, staring and sleeping as the wizard himself pops off to change into something spangly and golden. While he’s on stage, three attentive dancers follow him around like obedient robots, stopping and starting when he does, while green lasers raise in mesh, interacting with smoke, creating an intimate false ceiling and intensifying the feeling of togetherness these songs engender.

There’s a bodypopping interlude with the none-more-disco New York City Boy and the unexpected and very welcome inclusion of the rather lovely Se A Vida É (That’s The Way Life Is), too, before further new material is wheeled out in the form of new single Twenty-something, with its off-kilter rhythm and wistful lyrics offering a glimpse of a dark heart beating in the centre of the set. It’s brief, though; after a return to recently-hewn euphoria with Inside A Dream and the all-out-rave dedicated to rave culture that is Vocal, they stack up a mini-greatest hits set. It’s A Sin finally gets the entire house delightedly throwing shapes, and for Left To My Own Devices, inflatable dancers sporting pastel shaded romper suits show up for an energetic flingabout finalé which continues through their take on The Village People’s Go West, reminding us – as with their encore rendition of Elvis Presley’s Always On My Mind – that Pet Shop Boys down the years have also proven to be rather excellent interpreters of songs.

Churlish criticisms of such an event are few and far between. The sound is too quiet – perhaps because this auditorium is set up for natural rather than electronic amplification? – and even the inclusion of the lacklustre Winner, a trite ode to the 2012 Olympics, is forgivable as a pace changer amidst the euphoria. As a grandiose essay in the glossy programme attests: “A Pet Shop Boys concert has much in common with opera… it is ordinary life presented with a cinematic, theatrical, musical and visual backdrop that conjures the extra-ordinary.” Given both their career to date and the panache with which they pull off Inner Sanctum, the conflation of the Royal Opera House and Pet Shop Boys was surely an inevitability.

Before the spectacle draws to its close with an all-singing, all-dancing, curtain-closing reprise of The Pop Kids, Tennant, clearly and unaffectedly delighted, lauds his audience as amazing. He surely feels that thought coming right back at him from every corner of a room that down the years has seen much, but surely nothing quite like this.